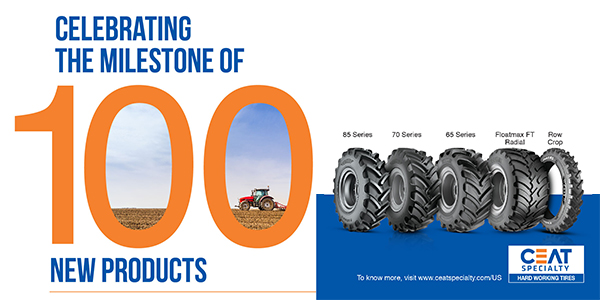 CEAT is celebrating the 100th tire size to come out of their new factory.

The new CEAT Ag Radial plant, opened only a year ago, has already reached an impressive milestone – release of 100 unique tire sizes.

Gambhire said that in addition to the number of sizes, the quality of CEAT Ag radials is also being well received by farmers in the US and Canada. He noted that CEAT has invested in best-in-class equipment, including the newest versions of tire building machines, for this new plant. “CEAT is the only tire manufacturer outside of Japan to have received the prestigious Deming Prize for total quality management (TQM),” he said.

Examples of the high-quality products being manufactured at the plant include the FARMAX R85, FARMAX R65 and FARMAX R70 Series radials, as well as the recently introduced FARMAX Row Crop Radial.

“We are excited with the reception CEAT has received from North American farmers. Tire dealers interested in joining the CEAT distribution network should contact our Charlotte office,” Gambhire said.