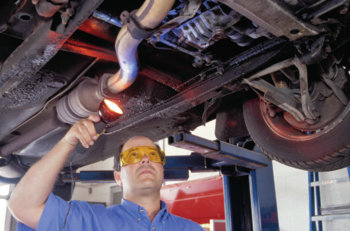 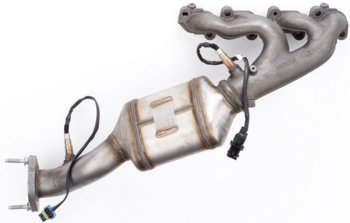 Since 1975 catalytic converters have been the most effective devices for controlling exhaust emissions. Before that, carmakers had done a somewhat effective job of controlling emissions by use of other systems. But controlling emissions with these systems alone meant lean mixtures and exotic ignition timing, which severely penalized power and fuel economy. When the use of catalytic converters was introduced, much of the emission controls could be taken out of the engine and moved into the exhaust system. This change allowed carmakers to retune the engine for better performance and improved fuel economy.

A catalytic converter contains a ceramic element coated with a catalyst. A catalyst is something that causes a chemical reaction without being part of the reaction. A catalytic converter causes a chemical change to take place in the exhaust gases as they pass through the converter. Most of the harmful gases are changed into a harmless gas. It modifies the threshold for a reaction, allowing an otherwise impossible reaction to take place.

Three catalysts are used: platinum, palladium and rhodium. Platinum and palladium are the oxidizing elements of a converter. When HC and CO are exposed to heated surfaces covered with platinum and palladium, a chemical reaction takes place. The HC and CO are combined with oxygen to become H2O and CO2. Rhodium is a reducing catalyst. When NOx is exposed to hot rhodium, oxygen is removed and NOx becomes just N. The removal of oxygen is called reduction, which is why rhodium is called a reducing catalyst. Platinum converts HC and CO, palladium converts HC and CO and rhodium converts NOx.

Newer converters contain cerium, which is an element that can store oxygen. Oxidation of rich fuel mixture is accomplished with the oxygen stored in the cerium rather than oxygen supplied by a secondary air system. This need for oxygen explains why the efficiency of a converter is dependent on the constant swings of rich and lean mixtures. When the mixture is lean, oxygen is extracted from the NOx in the exhaust and stored by the cerium. When the mixture is rich, the stored oxygen is used to oxidize the HC and CO in the exhaust.

Many states and localities have legislated annual automobile emissions testing that checks the actual emission contents. During an inspection the exhaust emissions test checks for the absence of a converter or a malfunctioning one. It is illegal in some states to remove a factory-installed converter and replace it with a test pipe.

Converters can fail by becoming clogged or poisoned. There is no inspection port to see if the converter is clogged. Quite often, the only way to tell if a catalytic converter is malfunctioning is to remove it and check the change in engine performance. On some converters, you can perform a tap test on them. Simply smack the converter with a rubber mallet and listen for a rattle noise. A rattle indicates loose catalyst substrate, which will soon rattle into small pieces that will clog the exhaust system.

Another way is to use a vacuum gauge and watch it while the engine is accelerated. If the reading drops to zero, the converter is clogged. You can remove the oxygen sensor and insert a pressure gauge in its place. Bring the engine speed up to 2,000 rpm and hold it steady. The desired pressure reading will be less than 1.25 psi. A very bad restriction will give a reading of over 2.75 psi.

The converter should be checked for its ability to convert CO and HC into CO2 and water. One of the tests is called the delta temperature test. Using a handheld digital pyrometer, check the pipe before and after the converter by touching these areas. There should be an increase of at least 100° or 8% above the inlet temperature reading as the exhaust gases pass through the converter on the pipe going to the muffler, out the converter. If the outlet temperature is the same or lower, the converter is not operating properly.

To do its job efficiently, the converter needs a steady supply of oxygen from the air pump. A bad pump, faulty diverter valve or control valve could be at fault. These components need to be checked. Another test is called the O2 storage test and is based on the fact that a good converter stores oxygen. Begin by disabling the air injection system. Once the converter and analyzer are warmed up, hold the engine rpm at 2,000 rpm. Watch the readings on the analyzer, once the numbers start to drop, check the oxygen level on the gas analyzer. The O2 readings should be about 0.5 to 1%. This shows the converter is using most of the available oxygen.

A final converter test uses the principle that checks the converter’s efficiency. Once again, make sure the converter is warmed up before using this test. Calibrate the gas analyzer and insert the probe into the tailpipe of the vehicle. Turn off the engine and disable the ignition system. Then, crank the engine for 10 seconds while pumping the throttle. The CO2 on fuel-injected cars should be over 11% and carbureted vehicles should have a reading of over 10%. As soon as you get the readings, restart the engine. Do this as quickly as possible to cool off the converter.

A converter can be damaged in several ways:

A plugged converter will cause loss of power at high speeds, stalling after starting, a drop in engine vacuum as engine rpm increases, or sometimes popping or backfiring at the throttle plate. Remember, in order for a catalytic converter to be effective, the fuel control system must cycle from rich to lean. The lean cycle allows the converter to store oxygen, and the rich cycle uses the stored oxygen. The fuel control system should adjust the air/fuel mixture so it toggles back and forth from a stoichiometric ratio.

Advertisement
In this article:Catalytic converter