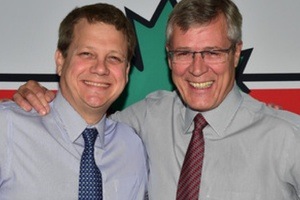 Stephen Wetmore congratulates Michael Medline on his appointment to President and CEO of Canadian Tire Corp.

Speaking as a part Canadian, I must ask you, beg you, plead with you to NOT offer up your wonderful company for acquisition by a U.S. firm. Any U.S. company.

And wash your mouth out with soap for speaking such blasphemy.

I’m not sure what you feel are the “certain conditions” under which you’d agree to a sale of one of Canada’s true national treasures (the others being Don Cherry, the Montreal Canadiens and any Tim Horton’s location) to an American firm.

Unless it was simply to trash and liquidate your fine retail chain. Cause that’s what American companies do to retail chains.

Evidence? Montgomery Ward. Sears. JCPenney, May Company. Kmart/S.S. Kresge. F.W. Woolworth. The list goes on. And the ones we still have are hanging on by a thread.

We’re a Walmart Nation. We likes it cheap. We likes lots of them. We likes it in big indistinguishable piles. We likes them with no heart, no character or no soul.

Did I mention that we likes it cheap?

That’s not Canadian Tire. Not the one I know. Not the one that binds a far-flung, thinly populated nation together.

You voice concern about competing with Target and Walmart on your turf. Please send them back, with our apologies. We know Target hasn’t been that tough for you anyway.

“It doesn’t make sense for us to wander away and do things that we’re not very good at,” you told financial analysts last week when asked about the possibility of selling out, leaving them salivating at the thought of cashing in all of their Canadian Tire bucks and shares of stock.

“We’re choosy. We’ll prepare for it, and if we’re going to execute on anything, it will be extremely well-executed with a high success factor. I’ll look anywhere for acquisitions, but it’s a matter of us fitting in.”

But you don’t fit. The well-managed and successful company you tend to today is more than 90 years old, and has some 1,700 locations under a range of banners, including sports stores and men’s clothiers. We already have all of that stuff, and we don’t need any more. Besides (if I can be blasphemous myself in an effort to scare you away) Americans don’t even like hockey!

I guess, though, since you are being groomed to retire at the end of November – current president Michael Medline becomes CEO on Dec. 1 – you won’t have time to muck things up. Mr. Medline, consider this fair warning… mean after Dec. 1.

As Mr. Cherry would suggest: Now be a good Canadian boy and get back to work, eh! (Thumbs up)

Or scatters all around said dumpster.

A WBTV-TV viewer spotted a mess of papers scattered behind a Tire Kingdom store in Charlotte recently. Stopping to take a closer look, they discovered reams of work orders and receipts complete with customer names, addresses, phone numbers, partial credit card numbers, license plate numbers, VINs and more. Tossed all over the area behind the store’s dumpster.

A TV crew and reporter were soon on the scene, and a massive amount of embarrassment ensued. At both the store and at TBC Corp. in Florida, which found itself apologizing for the transgression.

“The privacy and security of our customer information is a very serious matter and Tire Kingdom has a strict policy of document retention and disposal,” a TBC spokesperson told the station. “Unfortunately, that policy was not followed in this instance. Our workforce continues to keep our customers and customer information at the top of our priority list. We assure customers in the Charlotte area and across the country that we will continue to be vigilant in ensuring that our policies and procedures are properly executed.”

What would you do if one of your people pulled such a move?

While it hasn’t generated the media churn of the Cleveland Browns’ quarterback race or the potential of a LeBron James-Kevin Love superteam, there has been some local chatter about the possibility of Goodyear pulling a LeBron and actually coming home.

In this case, building a sparkling new tire plant in Akron for the first time in close to 100 years. (Goodyear PR will call me later with the exact dates.)

So, as the Plain Dealer plainly asked: Would Goodyear actually build its $500 million plant in Akron?

On one end of the location spectrum you have several southern states – generally labor union-free ones (like South Carolina) – and many low labor cost South American countries working on incentive packages to draw Wingfoot and its money (and jobs). On this end is the blue collar, union-supporting Rust Belt that could honestly use a jolt of good news.

But can the USW and Goodyear find a way to create a highly flexible and very cost competitive tire factory in northeast Ohio?

Most observers don’t think so. But some local “experts” offered that since the last of the rubber jobs fled town in the early 1980s, lessons have been learned and attitudes have been tempered. And apparently the USW has already communicated a willingness to work with the tiremaker to bring this longest of longshots home.

“To do nothing, you get nothing. If they don’t build it here, it certainly won’t be from a lack of trying.”

True. And if you were of such a mind, all of the signs are there. Goodyear moved into its bright new world headquarters last year, a proud day for city, state and corporate. And northeast Ohio is on a hot streak, what with LeBron coming home and the Browns seemingly relevant again and the 2016 Republican National Convention coming to Cleveland.

A lot will have to happen for Goodyear to turn a shovel in Akron. But it is not to be totally discounted. The news would explode all over this town, possibly louder than the collective scream let loose when LeBron said he was coming home.

It would be a hell of a day for Akron and Goodyear. Even if I’m paying off a bet with a steak dinner.