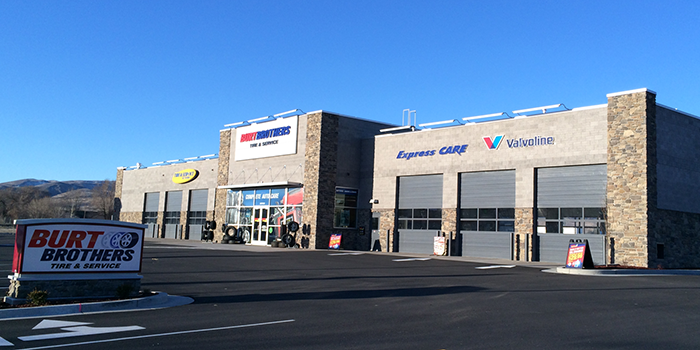 Salt Lake City is a playground for outdoor enthusiasts. The city features a backdrop of picturesque snow-capped ski mountains in the winter, and offers a variety of boating, hiking and off-roading activities during the warmer months.

Brothers Wendel and Ron Burt are proud to call Salt Lake City their home. They’re active in the business, civic and faith communities; they’ve raised their families in the beautiful valley, and they’ve built a successful tire and automotive service business with eight locations in and around Utah’s capitol city.

Wendel began his career in the tire business in 1977 putting his mechanical skills to work at a local auto shop. As time went on, his knowledge and leadership abilities grew and he was eventually promoted to store manager.

He accepted leadership roles at various independent dealers around town before he and his brother, Ron, who was also working in the industry, decided to take a leap of faith and begin their own business.

“We sacrificed our homes as collateral and took out an SBA loan to launch Burt Brothers Tire & Service in 1991,” Wendel says. “Now we’ve got eight locations and an expanding wholesale distribution warehouse in Salt Lake City, along what is known as the Wasatch Front.”

Now in its 23rd year of business, Burt Brothers Tire & Service has be-come a local household name. Their business mix is about 60% auto service and 40% tires.

He says they sell thousands of winter tires and also install many lift kits as well as oversized wheels and tires.

Over the years they’ve also created a niche for supplying local car dealers and others with tires from their warehouse, which they’re in the process of expanding.

“We’re increasing the size and capacity of our warehouse right now so we’ll have 45,000 square feet,” he says. “Some people don’t believe in having a warehouse but we haven’t been able to figure out how to get by without one because of the challenges of securing a steady supply from the manufacturers.”

Some of the brands they carry include Bridgestone, Firestone, Good-year, Pirelli, Hankook, Toyo and Nitto. 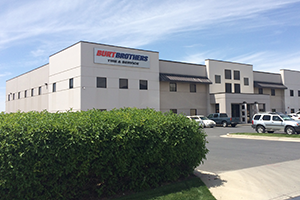 Wendel says the increase in variety and tire sizes over the years is one of the things he finds most interesting in the industry. “Our inventory has gone up tremendously because we’ve found it necessary to stock so many lines of tires to meet our customers’ needs” he says. “I try to keep my turns high, but I am always looking to take advantage of special buys.”

Along with keeping up the inventory, Wendel says another other challenge is staying current with the ever-evolving changes in vehicle technology.

“You’ve got to be on top of preventative maintenance and understand all the diagnostic equipment and new digital and electronic features,” he says.

“That’s the future of automotive and we’re working hard to be one step ahead, studying the hybrids and trends of tomorrow. There’s a lot of learning and transitioning in our business right now.”

Branching Out
When it comes to competition, Wendel says Salt Lake City has all the major regional players. “Every tire business that you can imagine is here,” he says. “Utah is a great place to do business and to live.”

Like many independent stores, they also face competition from car dealers. “The car dealers are alive and well and they do a fantastic job out here,” he says. “They are a big, big part of our competition, but also a part of our customer base both in auto service and in tires. We are friendly partners in a competitive world.”

Being in a competitive market means getting creative with advertising to make sure you reach all your potential customers. Wendel says a major part of their advertising is radio and TV spots.

They’ve also partnered with “local celebrities” to serve as salespersons for their business.

“We’ve generated a lot of business with radio and TV personalities and we ask them for endorsements, he says. “If they’re our customers, we invite them to be a spokesperson. Gratefully, the answer is usually yes.”

Along with advertising, Burt Brothers does something extra to catch attention – they are visibly active in growing the quality of life in the communities they serve. Their generosity and dedication to the Salt Lake City area has become well known.

“We’ll have customers come in and say to us ‘I didn’t need to shop around, I knew you guys would give me a fair price and I like what you’ve done in the community,’” says Wendel.

One of the charitable events they host in partnership with a local Rotary Club each year is a children’s coat drive. Held annually on Father’s Day weekend, they host a car show, tire burn out contest and party in the park to raise money for the initiative.

“Each year, we raise around $50,000 for the Rotary Club to distribute vouchers in the fall for the students,” Wendel explains. “They partner with a local retailer so the parents with inadequate means can come in and get coats, boots, anything they need for winter at no charge.”

Another initiative that’s been a major hit is their annual “Teacher Who Does it Better” competition. Playing off their slogan “Burt Brothers Does it Better,” they provide a local teacher with a brand new car.

Wendel explains that during the school year, teachers are nominated to be the “teacher of the week” and at the end of the contest the teachers’ names are put in a drawing. The grand prizewinner receives a pre-paid, two-year lease on a new car.

“All they have to do is pay the insurance and put gas in it,” he says. “It’s been amazing to see how much our local teachers look forward to this program and the recognition it provides their colleagues.”

The brothers aren’t afraid to go beyond the boundaries of their hometown to help others. Ron is currently serving a three-year mission in Canada for his church while Wendel recently took a major role in the Honor Flight Program that takes World War II veterans to Washington, D.C., to visit the World War II memorial – a site many of this aging cadre of soldiers have never seen.

Along with Wendel and Ron, Burt Brothers employs about 220, including their five sons, between their eight locations and warehouse.

“I have three sons and Ron has two. We’re proud that they are stepping up into leadership roles alongside our other managers, who have been with us for over 20 years.”

When they’re not busy at work, the Burt brothers don’t stray far from the world of mechanical wonders, often traveling cross-country as motorcycle enthusiasts with family and friends.

“We appreciate the opportunity we’ve had since taking that leap of faith 23 years ago,” Wendel says. “Salt Lake’s been good to us and we hope folks believe we’ve been good for Salt Lake.”