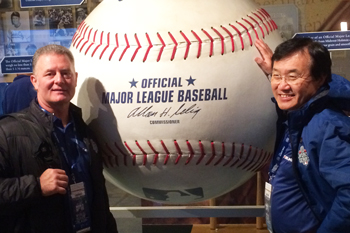 Forgive the folks at Falken Tire Corp. as they seem a bit giddy these days. They’ve hit a streak of good news, and are already taking advantage of the good fortune to launch a more aggressive brand-building effort and an expansive collection of new consumer and commercial products.

This past summer, the dissolution of the 16-year-old alliance between Goodyear and Falken’s parent Sumitomo Rubber Industries (SRI), which most analysts and watchers agree was a significant failure, unshackled Falken from some constraints and gave it control of a tire plant and proving grounds in the U.S.

Plus, it landed some key OE fitments, and reduced its motorsport involvement in favor of a multi-year deal to serve as the Official Tire of Major League Baseball, a unique position once held by heritage brand Firestone. Taking up baseball attaches the brand to a broad-based sport with universal appeal, perfect for brand building, and customer and consumer engagement.

Falken celebrated its new self with a specially called dealer meeting, held at the first game of the 2015 World Series, a logistical feat that saw the entire party of 42 dealer representatives arrive safely in Kansas City to witness the longest first game of a World Series, a 14-inning affair won by the eventual World Series champion Royals.

Of course, the event wasn’t all a game; the dealers learned first-hand about plans for what executives called “Falken 2.0,” an upgrade of the tire company that was only possible because the Goodyear-SRI alliance ended.

“The handcuffs are off,” said Richard Smallwood, Falken president and CEO. “We now have North American manufacturing ability at the plant in Buffalo (actually Tonawanda, N.Y.); under the alliance we couldn’t manufacture tires in North America. And we took back ownership of a test track in Huntsville, Ala.”

Liberated from that dissolved partnership, SRI can now focus its attention on promoting Falken as a global brand, he noted, but the company is staying close to its core focus on creating a profitable brand, delivering quality products, being a reliable supplier to its dealers, and remaining easy to do business with.

Rick Brennan, Falken executive director of marketing, also extolled the virtues of the alliance’s end. “The alliance formally ended on Oct. 1, and now the gloves are off,” he told dealers.

But Falken will play within itself, he said. “We understand where we fit in the marketplace, and we have to earn that value.” At the same time, Brennan noted the shifts in the market and suggested that some brands overstate their positions. “It’s a flat market, but everyone says they are growing 10%-15%. That’s not possible in a flat market.”

Falken, he said, “needs to give you a compelling reason to choose us.” Toward that end, Falken will work to deliver “products that stand out,” and are specifically designed and tested for North America. Additionally, Falken is creating dedicated product planners for passenger/HP, light truck/SUV and medium truck.

And we will “improve our brand power, image and awareness.” The deal with Major League Baseball is a huge step in that direction, he said. Supporting that deal will mean a tripled budget for consumer and trade advertising and promotion, stretching from social media to TV, as well as special promotions around spring training and even fantasy baseball.

The next 12 months will be busy ones for Falken, with four new consumer tires launching in the first quarter, and four medium truck radials hitting the market in the third quarter. But that’s not all, as Falken plans to add four more consumer tires in 2017 and another four in 2018, while the medium truck databook will see one new tire in 2017 and two more the following year.

Falken is beginning to make a stronger move in the Class 7-8 market, and will bring an array of new products next year. The RI130 EC is a new line haul steer axle radial, carrying Smartway verification and the promise of 100,000 plus miles to removal; the BI830 line haul closed shoulder drive tire was designed to limit irregular wear and improve traction; the RI150 EC is a regional steer and all-position radial with technology to reduce irregular wear and a Smartway badge; and the BI850 EC, an open shoulder drive axle radial that promised reduced irregular wear, longer mileage and improved traction, according to Falken.

On the consumer side of the slate, the first quarter will see the launch of the Wildpeak A/T3W, an all-terrain, all-weather light truck/SUV offering. With a 20/32nds tread depth, the tire has the deepest tread in the category, Falken said. The tread compound has 20% more silica compared to the Wildpeak A/T, rigid tread blocks for stability and traction, and 3D “canyon sipes” in the shoulder ribs. The first phase roll out will include 53 P-metric and flotation sizes over 15- through 20-inch wheel diameters and C and E load ranges. The tire carries a 55,000-mile warranty in all R, S and T speed ratings.

Four years in the making, the Wildpeak M/T will finally see dealer shelves in early 2016. As the original design neared its release, Falken officials discovered a nasty noise problem on certain road surfaces. The tiremaker went back to the drawing board and revised the tread design to minimize road noise. The new tread features a split block design, an offset shoulder profile for added off-road traction, an aggressive upper sidewall for protection and added grip, and road/mud ejectors. The Wildpeak M/T launches with 25 LT-metric and flotation sizes over 15- 20-inch diameters. The Q-rated tire comes in C, D and E load ranges, Falken noted.

The Azenis FK450 A/S is an all-season UHP with 68% market segment coverage thanks to its 48 stand and extra-load sizes covering 16- through 20-inch wheel diameters. The tire comes with a 50,000-mile warranty, and features Tension Control Technology for high-speed stability and traction, sculpted rib edges for straight line stability, high dispersion silica for all-weather grip, and the familiar 3-D canyon siping for added biting edges.

Kenji Onga, senior executive director of SRI and chairman of Falken Tire Corp. in the U.S., has only been on the job for a couple of months and already he has his hands quite full. Onga’s primary responsibility is to lead the improvement and capacity expansion effort at Falken’s first U.S. tire plant, the 92-year-old former Dunlop plant in Tonawanda, N.Y., near Buffalo.

Onga is keenly aware of the concerns of the 940 production employees at that USW-covered plant, which turns out about 5,000 passenger and light truck/SUV tires, 2,000 medium truck radials, and some 4,000 motorcycle tires per day.

While Sumitomo bought the plant from Dunlop back in 1986, it handed the keys over to Goodyear as part of the alliance deal. SRI/Falken will have to negotiate a new deal with the USW in 2017 when the current contract expires.

With a limited amount of vacant land to work with, Onga and his team are focused on increasing production capacity through greater efficiency, including revising the plant layout, improving employee training, the addition of automation, and bringing in all-new mixing and building equipment.

But not a single bolt can be turned until October 2016 – one year from the official end of the Goodyear-SRI alliance. That’s when SRI/Falken can begin transitioning away from 100% Goodyear production to Falken products. Even then, Onga cautions, “We have to develop tires in the Buffalo plant, and also we have to test the tires that are to be produced in Buffalo. So we need some lead-time to prepare everything.”

With Falken recently inaugurating a new plant in Turkey and boosting capacity at its plant in Thailand, North American Falken dealers should not be wanting for tires, the executive said.

Still, looking forward – by some years – Onga would like to see another plant in the U.S. But “at the moment, we want to concentrate on rebuilding the Buffalo plant, to increase our quantity and reduce our cost, and we have to improve everything in the plant. After that, after succeeding on the improvement of the Buffalo plant, a next step we will think about is a new factory.” tr