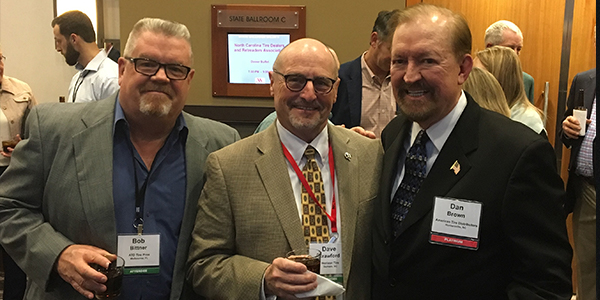 More than 200 tire dealers and guests packed the ballroom at the Raleigh Convention Center for the awards night dinner, which kicked off the two-day event. NCTDA also named Chris Monroe of Monroe Tire & Service as 2018 Dealer of the Year.

Both Boyette and Brown most recently worked for American Tire Distributors, based in Huntsville, North Carolina. Read more Boyette, Brown and Monroe below. 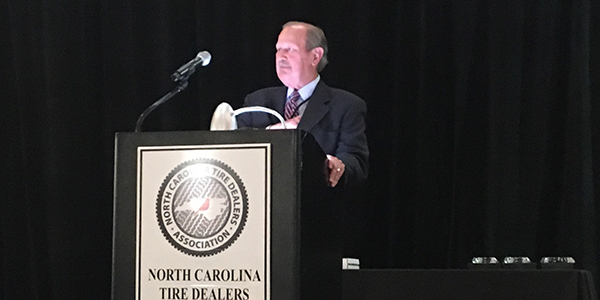 Roland Boyette giving a speech after being inducted into the NCTDA Hall of Fame.

In his 47 years in the tire industry, Boyette enjoyed a number of roles during his long career, including warehouseman, delivery driver, warehouse manager, manager of distribution and general manager before retiring in April 2017 from ATD as senior vice president of sales for the nation’s largest tire distributor. He also served on the NCTDA Board of Directors and was president of the organization from 2001-2002.

Stuart Schuette, president and CEO of ATD, introduced Boyette, admiring him for his accomplishments yet having a sense of humility and passion for those around him.

“He’s done virtually every job in this industry, yet if you step back and watch him and how he interacts be it at a facility or back in the offices at Huntersville, you can see the impact that he made over the years,” Schuette said in his introductory remarks. “I’ve had the opportunity to travel with Roland to industry events, meeting people who knew Roland and… what I saw was someone who cared deeply for them and had an impact on their lives. In 1999, Roland joined our organization and at the time it was about a $900 million business, and he helped that company get to $5 billion in his career.”

In his acceptance, a modest Boyette said he was truly honored to be recognized.“This is something that I never aspired for; it was never my mission,” said Boyette. “My mission was to try to make things better – better for myself, better for my associates and better for my customers – so this award is very special.” 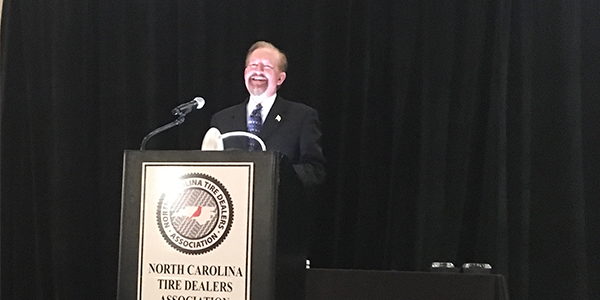 Dan Brown accepts his induction into the NCTDA Hall of Fame.

After being inducted into the national TIA Hall of Fame in 2016, Brown was recognized by his home state and its association. During the past 41 years in the tire industry, Brown has held numerous executive roles in sales, marketing and procurement, culminating as president of Tire Pros and executive vice president for ATD at the time of his retirement in 2016. Under his leadership, the Tire Pros franchise organization grew from roughly 200 locations in 12 states to 725 stores across 45 states. Brown also served on the MCTDA Board of Directors for seven years and was president of the organization from 1993-94.

Brown was introduced by industry veteran and Tire Review Contributing Editor Dave Crawford, who worked with him for several years to grow the Tire Pros organization.

“Dan built it from the ground up,” said Crawford about Brown’s impact on the growth of the Tire Pros franchise. “Dan put the consistency in place and when he retired, there were more than 700 Tire Pros locations nationwide. It’s a tribute to Dan. He built the team, putting it together. He listened to dealers’ input and I think that’s so important. He built it to the premier program that it is today.”

The very personable Brown accepted the recognition sharing stories of those in the crowd, smiling back at his daughter, son and wife, who were beaming with pride. He thanked them for their support as he accrued millions of frequent flier miles over the years and the events he may have missed. Now retired, his focus is on his family, making up for lost time. He also recognized his own parents, especially his mother who recently passed away, for raising him with values that contributed to his success.

“She would wave a finger at me and say, ‘Now Dan, don’t get up over your raisings; remember where you came from; stay humble and kind; and never let any success you have make you think you’re better than anybody else; and never [forget] those who helped you along the way. Know that your work is a self-portrait, so take pride in the work that you do. Surround yourself and your associates with people who that are a positive influence on your life. And son, always conduct yourself as a gentleman. And learn to be a good dancer. Girls love a good dancer.’”

Though Brown and Boyette worked together at ATD, they actually met at the same NCTDA event years before.

When speaking about Boyette, Brown said “From a business perspective, he’s probably one the best salesmen ever. He was so good, in fact, that we entrusted him with our biggest customers across the country, and whenever there was a flare-up [anywhere else], we’d call Roland and he would… get the situation smoothed over and just did an outstanding job.” 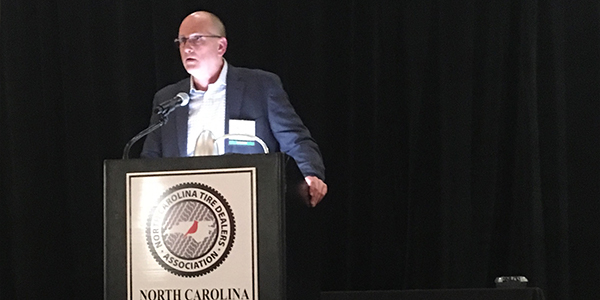 Chris Monroe was named 2018 NCTDA Tire Dealer of the Year.

Also recognized at the event as the NCTDA 2018 Tire Dealer of the Year was Chris Monroe, owner of Monroe Tire & Service in Shelby, North Carolina.

Monroe, a Tire Review Top Shop Finalist in 2017, is a single-location owner based in a small town. He epitomizes the example of how one owner in one shop can make a positive impact both locally and nationally, including the value that comes from getting involved and breaking out of your comfort zone as an owner. He serves on the NCTDA Board of Directors and has recently served on the national TIA board. His focus remains on innovating the customer experience and being of service to those around him. I was honored as editor of Tire Review to present him with the award.

In his remarks, he shared a personal story of the importance and value of connecting with others in the industry and how much he has learned and grown as a result of doing so.

“I was not making money, I was just keeping my head above water,” Monroe said. “Then around 2000, I got out and started to engage and one of the places I engaged was with this association. I decided that being irrelevant was not going to be an option.”

When responding to people wondering about the value of joining an association and getting involved in the industry, Monroe shared this with the audience, “I can tell you what it’s done for me. It’s created access to opportunity, a voice in government working with TIA, and I never would’ve done that before…. Also, it’s about professional collaboration [meeting and learning from those] who see the state and the nation [and the industry] at a different level.”

The evening concluded with a keynote by Tom Greco, president and CEO of Advance Auto Parts, exploring trends, challenges and opportunities in the marketplace as mobility evolves.