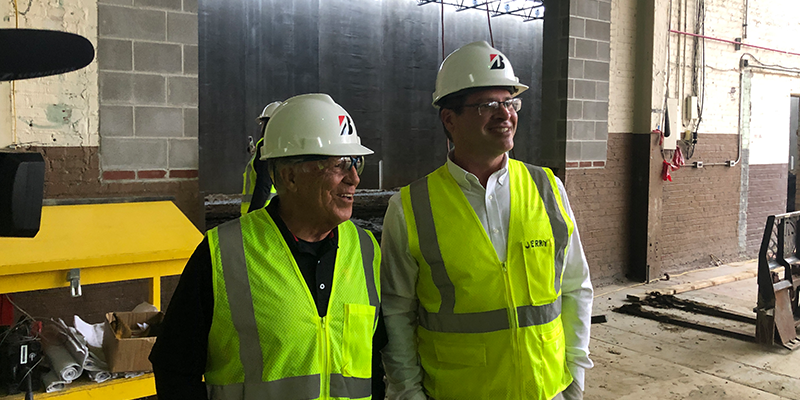 Bridgestone opened its doors to members of the media this week to give an update on the construction of the facility, which will be the future home of Firestone race tire manufacturing.

Metal clanging and the faint beep of construction equipment in the distance may sound like your average, everyday construction site. But at the corner of Firestone Parkway and Wilbeth Road in Akron, Ohio, that construction signified the continuation of a legacy in IndyCar racing.

“IndyCar racing, in particular the Indy 500, is really at the core of our business,” said Laura Boggs, director of motorsports for Bridgestone Tire Americas Operations, during a media tour of what will be Bridgestone’s new race tire manufacturing facility. “It started more than a century ago with Harvey Firestone, and it’s still at the core of our business today. We’re very proud of our legacy with the sport.”

Bridgestone opened its doors to members of the media this week to give an update on the construction of the facility, which will be the future home of Firestone race tire manufacturing. The building, called the Bridgestone Advanced Tire Production Center (ATPC), will be located across the street from the Bridgestone Americas Technical Center and less than a mile from the Bridgestone Advanced Technology Workshop, where race tires are currently produced. IndyCar legend Mario Andretti, who tested Firestone race tires early in his career, joined the media on the tour to see the facility and offer insight into the significance of the partnership with IndyCar and Bridgestone.

During the tour, Bridgestone staff touted the new manufacturing technologies that would be used in the facility, including new mixing equipment, which will contribute to the plant’s efficiency. Unlike at its current facility, the race tire building staff, as well as its R&D teams, will be under one roof, adding to the efficiency of the manufacturing process.

“Right now in our current facility that was built in the early 1900s, they make tires over there and the testing is done here,” said Cara Adams, director of race tire engineering and production. “As an engineering organization to be able to have this right across the street, it offers a lot to us. Not only to keep our tires here [in Akron], but it’s also great for our engineering teams because we’re able to walk right across the street and see the construction of the tires and look at them as they come off the line.”

With the foundation of the building laid, the structure will be enclosed with windows by December, just in time to move in the first tire-building machine, Adams said. Gradually, equipment from the old facility will move over in the next few months. All race tire manufacturing will move to the new facility over the next four years, and early plans call for the site to produce its first Firestone Firehawk race tires for testing in the IndyCar Series by the end of 2020. Those tires will be slated for use in IndyCar races in 2021. Adams said in four years, the plant is expected to reach capacity, producing around 30,000 tires per year.

“The idea is to make consistent operations between here and there [the old manufacturing facility], so before we start upgrading, we have to make sure the process is the same and the tires are the same,” Adams said. “These drivers [IndyCar drivers] are very, very discerning. The very smallest change in the tire they can pick up.”

While the plant’s main focus will be to produce race tires for the IndyCar series, Nizer Trigui, chief technology officer for Bridgestone, said the facility will also produce experimental tires that its teams can study across a variety of segments with the additional manufacturing, testing and R&D space.

In addition to constructing its new race tire factory, Bridgestone pledged a five-year commitment in February to continue serving as the sole tire supplier and official tire of the NTT IndyCar Series through 2025. At the beginning of this month, Roger Penske, founder of chairman of Penske Corp., purchased the company that owns the Indianapolis Motor Speedway, IndyCar series and IMS Productions.

“All of these things are the momentum we need, that the company needs and that the series needs, to move forward,” Boggs said.