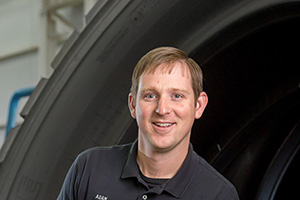 Bridgestone Americas has made changes at its passenger, light truck and OTR facilities in Aiken County, S.C. Tim Painter will head up Aiken PSR plant, while Adam Barfoot will head Aiken ORR.

“Tim excelled at leading LaVergne’s operational teams with a constant focus on achieving key manufacturing metrics,” said Mitch Burke, executive director of consumer manufacturing for Bridgestone Americas. “I am confident his experience will result in continued success at Aiken PSR.”

Painter has 28 years with Bridgestone Americas. Previously he worked in leadership positions in both plant technical services and the process engineering development division. Painter has a bachelor’s degree in business from Tennessee Technological University.

Barfoot, former operations manager for the Aiken ORR Plant, has been named plant manager of that facility, replacing Ron Brooks who retired in December 2015.

“We appreciate Adam stepping up and leading the Aiken ORR team after Ron Brooks retired, and we look forward to continued leadership success at the Aiken ORR Plant,” said Greg Harris, executive director of Commercial Manufacturing for Bridgestone Americas. “Adam was instrumental in the startup of the Aiken ORR Plant and will continue to play a critical role in the plant’s success.”

Barfoot has been with Bridgestone for more than 10 years. He’s held leadership positions at several of the company’s tire manufacturing sites, including operations manager and scheduling and industrial engineering manager at the company’s truck and bus tire plants in Middle Tennessee. Adam earned his bachelor’s degree in Industrial and Systems Engineering from the Georgia Institute of Technology and an MBA from Middle Tennessee State University.