As the official tire of the NFL, NHL and the PGA Tour – and being involved in connected events – Bridgestone Americas certainly has a number of major opportunities to showcase itself in the most highly visible sports arenas in North America. 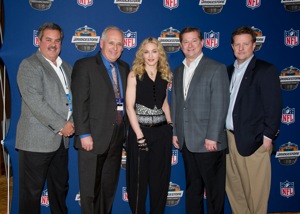 One of those “connected events” is perhaps the single biggest sporting event in the Western Hemisphere. And connected to that are other events, like the unveiling of new TV spots by major consumer brands and of course, the Super Bowl Halftime Show.

The always interesting, unique multi-million dollar commercials are the “top story” of post-Super Bowl Monday morning water cooler chatter. This year, Bridgestone offered up new elements to its “Time to Perform” campaign. In addition, Bridgestone continued as sponsor of the Super Bowl Halftime Show – this year featuring Rock-n-Roll Hall of Famer Madonna – gaining even more exposure for the brand.

The Super Bowl itself registers a “10” on the “Wow Factor Scale,” a factor the tiremaker well-leverages by hosting dozens of key dealers and other customers over the four days before and during the actual NFL championship game, this year pitting the AFC champion New England Patriots against the eventual winner, NFC champ New York Giants.

Bridgestone brought key dealers and customers together in Indianapolis to help celebrate an unofficial American holiday. At least that’s the feeling one has wading through the week of hype and parties, not to mention “meet-n-greets” with football icons like Hall of Fame quarterback Troy Aikman, New Orleans Saints great (and the father of two Super Bowl MVP quarterbacks) Archie Manning, and now former Indianapolis Colts QB Peyton Mann­ing.

Phillip Dobbs, Bridgestone’s chief marketing officer, arrived at the tiremaker from outside of the tire industry and is using that viewpoint to “connect the dots” with the company’s sports involvement, which literally dates back to the very first Indianapolis 500 in 1911, won on Firestone brand tires.

Dobbs feels fighting the clutter of messaging to consumers is “a difficult task, and that’s why taking on opportunities with the NFL is important as it has measureable payback.” Dobbs pointed out that Bridgestone’s challenge was to create commercials that motivated consumers and left them knowing that they clearly saw a Brid­gestone ad. 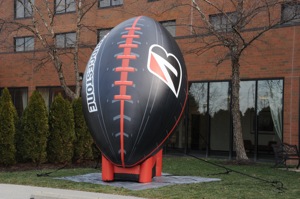 According to Dobbs, Bridgestone also is looking to define ways to em­brace the “female CEO of the household,” since women play a key role in deciding upon which tires their families drive.

In the “Time to Perform” campaign, Bridgestone employs its latest tire technologies to “improve” sports performance. The humorous spots feature Aikman, as well as fellow Hall of Famer Deion Sanders, ESPN’s Michelle Beadle and Dick Vitale, and NBA stars Steve Nash and Tim Duncan in a pair of spots that tie specific tire characteristics to a new breed of ball – and puck.

In one, Aikman and Sanders are shown throwing and catching a tire tech-enhanced football that has the ability to curve through the air like a car hugging the curves of a road. In the other current spot, Duncan and Nash dribble an enhanced basketball that is silent when it hits the floor, demonstrating Bridgestone’s ability to reduce noise on the court and on the road.

“We’re excited about our new campaign, which creatively integrates our sports marketing initiatives with our specific product lines and their unique characteristics by creating an imaginary environment in which our technologies transcend the traditional bounds of tires,” said Dobbs. “And we enjoy celebrating our successes with our dealers and distributors, who are on the frontline of our selling effort and are a very important part of our efforts and our strategies.”

Bridgestone recognizes it needs to be successful with both of its brands as the company’s dealers do a sizeable amount of business with each, especially with Firestone on the replacement side. The Firestone brand has carved out its sports niche as the tire sponsor of the IndyCar race series and Firestone Indy Lights series, and as the official tire of Major League Baseball.

The grand scale of Bridgestone’s sports marketing efforts – for either brand – can certainly be attributed as a primary reason both brands carry such high recognition.