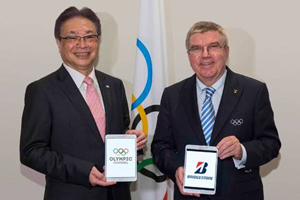 Bridgestone Corp. has been named the first Founding Partner of the Olympic Channel following a four-year partnership agreement with The International Olympic Committee (IOC).

The Olympic Channel is a new digital platform that offers fans a way to experience sports and the Olympic movement year-round. The channel will launch worldwide on Aug. 21 following the closing ceremony of the Olympic Games Rio 2016.

“This is a very exciting time for Bridgestone as our worldwide Olympic partnership marks the first truly global marketing platform in our company’s history, and the Olympic Games Rio 2016 – the first ever in South America – are our first as a Worldwide Top Partner. It is fitting that we also are the first Founding Partner of the Olympic Channel,” said Masaaki Tsuya, CEO and representative executive officer for Bridgestone Corp.

“The Olympic movement is universal and we continue to reaffirm Bridgestone’s longstanding support for sport and our belief that the core principles of Olympism – and the world’s greatest athletes – should be celebrated every day of the year,” Tsuya adds.

The four-year partnership between Bridgestone and the IOC extends through to 2020.

Bridgestone has been a Worldwide TOP Partner since 2014 and the 10-year partnership will allow Bridgestone to serve as a TOP Partner at the Olympic games through 2024.