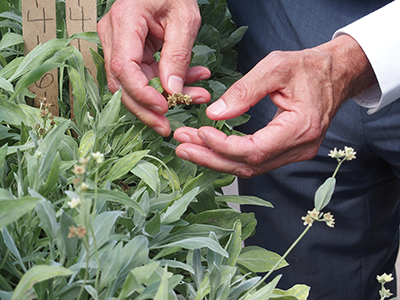 In the middle of blistering hot cotton country, Bridgestone Americas is working hard to introduc­e a new kind of crop that it feels will be a true “game-changer” for the tire industry.

On Sept. 22, the tiremaker hosted a grand opening for its Bio­rubber Process Research Center in Mesa, Ariz. The 10-acre research and development campus is the center of Bridgestone’s efforts to extract natural rubber from a desert shrub called guayule (pronounced “why-u-lee”). 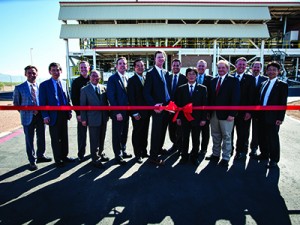 This isn’t the first time that the shrub, primarily native to Mexico and Texas, has made headlines in the state of Arizona.

The Gila River Indian Community in Sacaton, Ariz., was the site of the U.S. Department of Defense’s guayule research and development initiative in 1982.

Guayule, however, has a long history that dates back even further – and a roller-coaster past of fits and starts.

According to Bridgestone Americas’ David Dierig, section manager of Bridgestone’s Agricultural Operations Guayule Research Farm in Eloy, Ariz., guayule has been a source of natural rubber since the pre-Colum­bian times when Native Americans of Mexico used it to form balls for their games.

Dierig, who has spent a significant amount of time studying guayule, including a masters from Arizona State University and a doctorate from the University of Arizona focusing on guayule, told Tire Review that Native Americans actually chewed the plant to extract the rubber and then formed the chewed masses into a ball.

The plant was generally disre­gard­ed as a weed until efforts to commercialize guayule rubber began in the early 1900s in Mexico. According to Bridgestone, by 1910, Mexican rubber – produced primarily by the Continental Mexican Rubber Co. – reached a high of 10,000 tons, which accounted for 24% of the total rubber imported into the U.S. These operations ceased in 1912 when the Mexican Revolution all but halted commercial production.

Heading North
Commercialization efforts then moved to the U.S. – mostly to sites in Arizona and California. Production continued at a much slower pace until it completely ceased during the Great Depression. 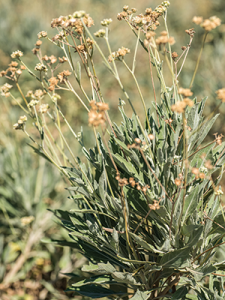 As a means to produce additional natural rubber for wartime efforts, the U.S. restarted its guayule rubber research – deemed the Emergency Rubber Project – during World War II. According to Bridgestone, more than 32,000 acres of guayule shrub were planted on 13 sites in California, Arizona and Texas. Those shrubs produced 1,400 tons of guayule rubber and the basis of the nation’s research into the shrub. These efforts were stopped in 1945 shortly after the end of the war.

Arizona stepped into the spotlight again in 1982 when the U.S. Department of Defense issued a $20 million research and development loan to the Gila River Indian Community for guayule rubber commercialization.

The Firestone Tire & Rubber Co., later acquired by Bridgestone Corp., participated in the project as the prime subcontractor responsible for producing tire grade rubber. The facility was eventually shut down in 1990 for “a variety of issues,” said a representative from Bridgestone Americas, declining to comment further.

Looking Forward
Bridgestone Americas is not the only company looking into the viability of guay­ule rubber. Since 2012, Cooper Tire & Rubber Co. has been working with Arizona-based guayule research firms Yulex Corp. and Pan­Aridus to develop tire grade guayule rubber.

Bridgestone Americas, however, is the first tiremaker to build its own guayule farm and research facility in North America. This is being done to diversify Bridgestone’s rubber sourcing, as traditional natural rubber sources have become increasingly unstable in terms of pricing and production. Tiremakers around the global have been seeking ways to level raw material costs while gaining better control over volumes and quality.

“Guayule research is being done in response to emerging challenges in the industry,” said Bill Niaura, director of new business development, Bridgestone Americas. “For more than 100 years, the tire industry has been single-sourced from hevea natural rubber trees grown in Africa and Southeast Asia. Today, as an industry, 97% of our natural rubber is sour­ced from the hevea tree in Southeast Asia. This presents some challenges.

“Hevea trees are susceptible to fungal infestations and the cost of natural rubber can fluctuate,” added Niara.

As of today, Bridgestone is already working toward this goal. At the ribbon cutting celebration, Brid­gestone said it expects to have preliminary guayule rubber samples produced at the Biorubber Process Research Center within a month. 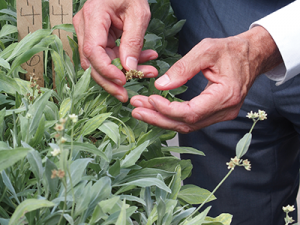 Natural rubber is extracted from the plant in three steps. The bales of dried guayule are first ground and milled into small particles, then sifted to remove dirt and dust and finally crushed to expose the plant’s natural rubber content. Then, the guayule particles are immersed in solvent to separate them into three distinct materials – natural rubber, resin and a woody material.

In addition to studying the nat­ural rubber, researchers will also work on ways to utilize the other two materials – as natural rubber only makes up about 5.5% of the total plant. The woody material, called bagasse, makes up a majority of the plant at about 73%.

The success of guayule commercialization for Bridgestone will not result from producing tire grade natural rubber. According to Niaura, the operation will be successful once the tiremaker can make full use of the non-rubber parts of the plant, which accounts for 94.5% of the plant.

Moving Beyond Hevea
Bridgestone’s Biorubber Process Research Center will work in tandem with Bridgestone’s Agro Operations Research Farm in nearby Eloy, and its technical center in Akron. Because guayule is not a commercial crop, Bridgestone must produce the seed as well as grow the crop.

“Our goal is to create a guayule crop that can effectively integrate into and compete with the existing agricultural economy,” said Dierig.

Once Bridgestone’s Agro Operations Research Farm understands the cultivation of guayule and develops best growing practices, it will work to develop relationships with independent growers in an effort to effectively compete with other crops. In the case of desert climates like Arizona, this means competing with cotton farmers.

According to Niaura, guayule still needs to undergo certain legal and legislative processes to become a low-risk crop. For example, currently a farmer growing guayule cannot be insured.

Bridgestone expects full commercialization in the long-term, with Niaura citing early 2020s as the project’s goal.

Bridgestone is also looking beyond Arizona and the guayule crop. Niaura noted that guayule could potentially be grown in any desert climate. Dierig mentioned countries like Italy and Greece as potential fits for the crop. Niaura also stated that Bridgestone is not giving up on its Russian dandelion plant project. 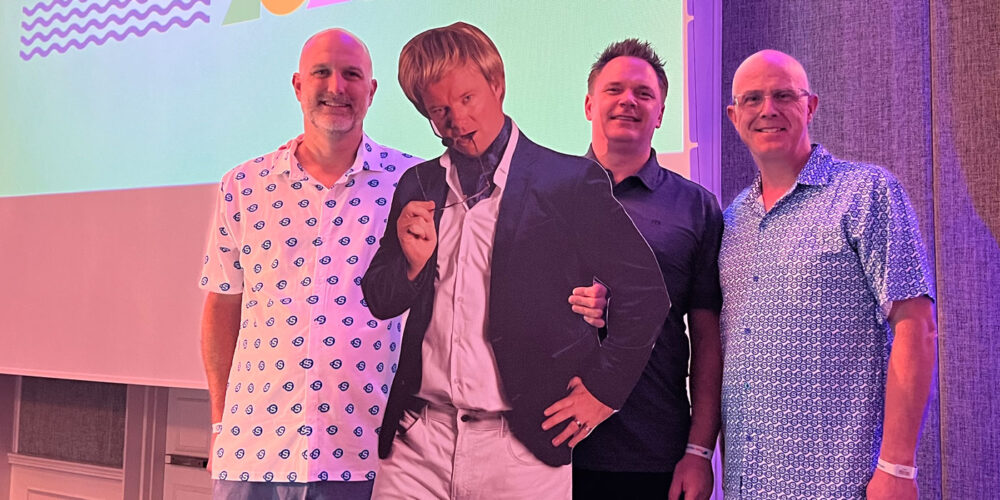 If you're on a ship sailing the high seas and get caught in a storm, you have two options. The first is to stay put, batten down the hatches and retreat all crew members to the lower decks in hopes that this will all blow over soon. The second is to rev the engines and sail unapologetically headfirst toward the darkened waters in hopes that you'll escape to the other side faster and with more experience than your competition.