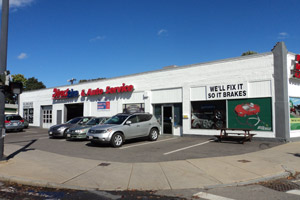 This past November, Boston-based Direct Tire & Auto Service celebrated its 40th year in business with a special promotion.

During the month of November, Direct Tire donated $40  from every set of winter tires sold to a charity. The tire business sold 700 winter tires and at the end of the month donated $28,000 in total to four different Boston-area charities. The Boston’s Children Hospital, Massachusetts Society for the Prevention of Cruelty, Boston Food Bank and the New England Center for Homeless Veterans each received $7,000 from Direct Tire.

“To celebrate the 40th anniversary in this way was a real feel-good thing for me,” said Direct Tire Owner Barry Steinberg. “My guys loved it and wanted to help these organizations from the bottom of their hearts and it was the right thing to do for these organizations.”

Steinberg founded Direct Tire in 1974 after spending some time working for a wholesale tire business in Boston.

“I was born in New York but when I got out of the Army in 1969, I was offered a job in Boston at a company called Duddy’s Inc.,” said Steinberg. “At that job I learned the tire business from the best by being on the phone selling tires.”

In 1974, Steinberg left his job at Duddy’s to begin a new adventure – an adventure that began with a passion to engage with consumers.

“I really liked the retail side of the tire business,” related Steinberg. “When someone’s happy, they’ll tell their friends. And I had a dream to bring the consumer’s experience of buying tires to a higher level.”

“Believe it or not, the building was an old Studebaker car dealership in the ’20s and ’30s. When I arrived, it had been a family truck leasing business where the father passed away and the kids wanted to rent the building.”

Since then, Steinberg has pursued his dream and expanded Direct Tire to four locations in the Boston metro market. He currently employs 65 employees and is evaluating a fifth location. The tire business is very involved in the community and supports Boston organizations such as little league athletics, schools and charities.

“After 40 years, I’m still having a good time,” concluded Steinberg.