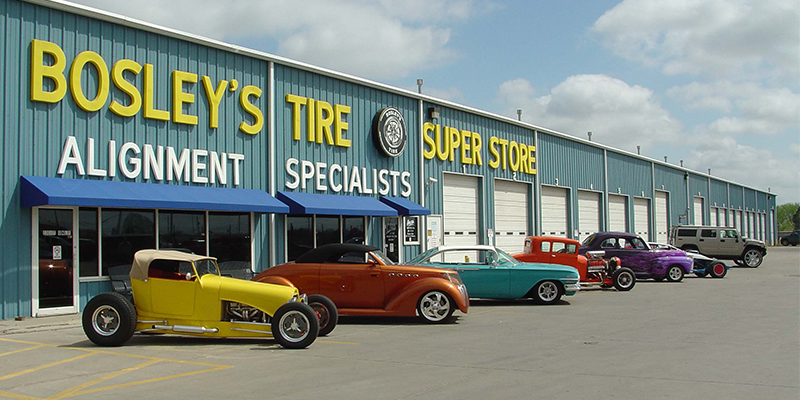 Lonnie Bosley, owner of Bosley Tire & Wheel, is looking to open Bosley Bargains, a “carryout” tire warehouse that will sell major tire brands at wholesale cost to the public.

Bosley Tire Super Store, one of Lonnie Bosley’s tire shops in the Wichita-area.

You can get food, alcohol and coffee in a “carryout” style, so why not tires?

Lonnie Bosley, owner of Bosley Tire & Wheel and Bosley Tire Super Stores based in Wichita, Kansas, is looking to capitalize on that idea by opening Bosley Bargains, a “carryout” tire warehouse that will sell major tire brands at wholesale cost to the public.

“Our plan is to sell wheels 50 percent below Tire Rack and Tire Buyer and sell tires 10-15% less instead of distributing tires to other tire dealers,” Bosley said. “You’re cutting out the middle people … Instead of trying to sell to other tire companies in the area, we’re just selling them to the public for the same price (direct from the manufacturer) — not less.”

His first Bosley Bargains – a 21,000 square foot warehouse that can fit 60,000 tires – will allow customers to purchase the tires they need and go wherever they’d like to have them installed. He said he’ll profit from the concept by buying tires in bulk.

“We are selling everything carryout,” he said. “People are buying (tires and wheels) on the Internet and getting them shipped to their house, so what difference does it make if they come into Bosley Bargains and buy it here?”

Bosley said his first Bosley Bargains is set to open this weekend. He has plans to open four more by the end of the year.

And by the end of 2018, he plans to have 10 stores under the Bosley name: four “bargains” warehouses and six Bosley Tire & Wheel service centers.

Advertisement
In this article:tire distributor