Ricky and Dianne Benton have an understanding of the importance of strong parenting and a good home environment to children. After all, they reared three boys who have become successful adults involved in the family business, and they are strongly involved in the lives of their grandchildren. 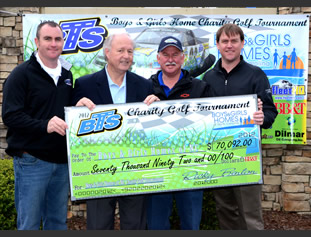 That’s the main reason why they engaged more than a decade ago in supporting the Boys and Girls Homes of North Carolina, which was begun by W. Crowell Black, the founder of their family business, Black’s Tire and Auto Service and BTS Wheel Distributors.

The 2012 Black’s Tire Service Charity Golf Tournament to benefit the children served by Boys and Girls Homes of North Carolina was held April 13 at Foxfire Golf and Resort. The tournament was one of the several events that occurred as a part of the NASCAR "Back to The Rock" Camping World Truck Series race weekend at the fabled Rockingham Speedway.

Black’s Tire Service owner Ricky Benton said, “We wouldn’t be able to do this without the support of our family, our BTS family, and our business supporters. Dianne and I appreciate the efforts and contributions of each person and business involved in the BTS Charity Golf event. The dollars raised through these efforts help children move beyond the issues in their lives that placed them in the care of the homes. It allows them the chance to work through their problems and grow into caring and responsible adults. We are blessed to be able to be a part of this great organization and support it in its efforts to help children in need."

With corporate headquarters located in Whiteville, N.C., Black’s Tire and Auto Service has more than 30 locations throughout North and South Carolina.

Advertisement
In this article:Events, Tire Dealers