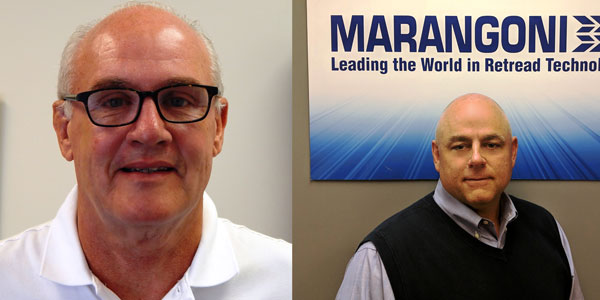 After more than 18 years with Marangoni, 16 of those as president/CEO, Bill Sweatman (left) has announced his retirement effective May 1. Clif Armstrong (right) has been named president/CEO of MTNA.

After more than 18 years with Marangoni, 16 of those as president/CEO, Bill Sweatman has announced his retirement effective May 1.

Sweatman joined Marangoni shortly after it was formed in 1998 by Jack Woodland in Walnut Creek California.

Bill explained, “I started in the tire industry in 1977 and the retreading industry in 1984. The industry has been very good for me and my family and I would like to thank the employers, peers, customers, suppliers and friends for this experience and I wish all well.”

Clif Armstrong has been named president/CEO of MTNA.

Clif brings over 35 years of industry experience to this role. He has served in multiple executive management functions including sales, marketing, operations, and Tire Company owned commercial store networks.

Since September 2017 he has served as vice president of business development for Marangoni Tread North America.