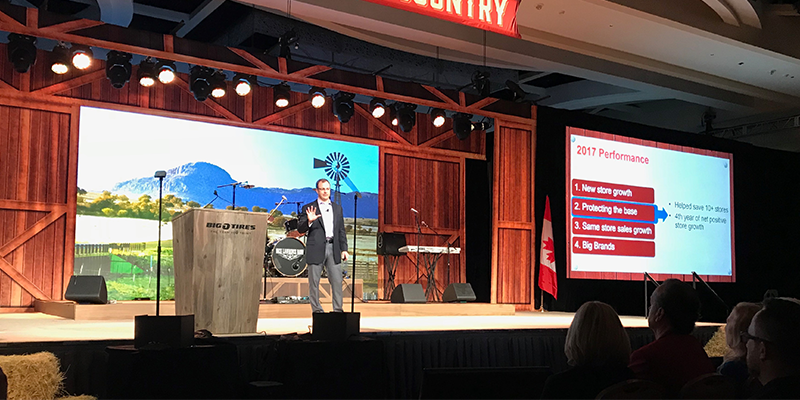 Big O Tires’ annual dealer meeting focused on the “Big O Yes,” a cultural shift in the organization and its approach to customers across the franchise.

Brant Wilson, president of the Big O Tires franchise, details areas of growth in 2017 with plans for continued expansion in 2018.

Several hundred franchise owners and team members from across the United States herded together in San Antonio this week for the 2018 Big O Tires Annual Convention.

A western theme wove through the event, which showcased the optimism and growth goals of the tire retail franchise organization. Approximately 85% of the total stores in the Big O system were represented during the three-day conference.

At the heart of the positivity was the new mantra for the Big O national organization – the “Big O Yes” – introduced at the event. Big O Yes is a cultural shift in the organization and its approach to customers across the franchise. With that simple three-letter word in mind, the goal is to provide customers with a higher level of care, enthusiasm and support in each interaction. From store hours aligned with customer needs to online appointment scheduling and phone manners, the new culture of Big O Yes is intended to fuel customer loyalty and increased conversions for Big O owners.

Much like the movie, “Yes Man,” attendees were asked to say yes, to support the customer in the moment – and if they can’t solve the problem, to make the effort to find a solution or to offer advice. Tools provided by Big O to support this initiative include the addition of Marchex for call analytics and tracking of customer phone interactions, a completely redesigned website set to launch in the third quarter that will include stronger data integration across digital platforms for more seamless customer interactions, enhanced online scheduling and more. According to Brant Wilson, president and chief operating officer of franchise with the TBC Corp., parent company of Big O Tires, internal data shows that online appointments result in an 85% conversion rate if the customer contact was within 30 minutes of the inquiry. Feeding the calls for dealers in the network is a highly targeted search engine marketing (SEM) strategy, intended to drive stronger traffic to those dealers that take advantage of it.

An emphasis on offering the Big O credit card or secondary financing was also highlighted. Numbers shared at the event indicate that a Big O average ticket is $219 but jumps to an average of $503 when using one of the credit tools available to dealers.

Planting the seeds for growth within fleet accounts was also emphasized as available to Big O dealers. With the trends in vehicle ownership and ride-sharing on the horizon, dealers were encouraged to add passenger and light-truck fleet service to their offerings with training and software updates provided by the franchise organization to support that transition.

The Big O franchise is part of TBC Corp., which is owned by Sumitomo Corporation of Americas. Much of the energy also centered on the 50-50 wholesale distribution joint venture between Sumitomo and Michelin North America, called NTW, announced in January 2018 and recently approved by the U.S. Federal Trade Commission. Not only does the NTW deal allow for a higher level of service to Big O dealers and lower inventory overhead, it also provides increased access to premium brands – including Michelin, Goodyear, Bridgestone and Continental. Moving forward, having NTW as part of the family provides a foundation for franchise growth supported by national distribution to better support expansion goals in more areas.

According to Wilson, 2017 was a year of strong growth for the franchise. Highlights include 57 new stores added in 2017 including the conversion of 44 existing NTB locations into the Big O family. New areas include states such as Ohio, Tennessee, Virginia and Minnesota. The franchisor also signed 12 new area development agreements designed to support growth objectives into 2018 and beyond that target areas of population growth and expansion.

With the additional stores branded and added in 2017, the number of franchises now sits at 449 total locations in 23 states. For 2018, the company plans to expand even further with goals to add another 25 locations in 2018 and the distribution support across a wider national footprint thanks to the relationship with NTW.

Same-store growth numbers were also strong in 2017, showing 3.5% overall growth – and 68 locations enjoying over 10 percent increases and another 12 locations seeing growth of 25% and higher. Contributing to those numbers is the strong relationship with Goodyear, Michelin and the promotion of other major brands in addition to their proprietary Big O brand.

Each year, Big O Tires raises funds for college scholarships available to the children of franchisees. The big prize this year was a one-of-a-kind 2015 Mustang GT, donated by Continental Tire the Americas, pimped out by West Coast Customs, with a 800HP engine retooled by Petty’s Garage. Shown here with her team, winner Neena Dutt and her husband own 22 Big O Tires locations. The event raised $120,000 in scholarship funds, breaking the record-setting amount of $83,000 last year.