On Aug. 27, a large truck owned by G.B. Green Construction Management was involved in an accident with an Escambia County, Fla., school district bus carrying students.

Fifteen Pensacola High School students and the bus driver were injured, and transported to local hospitals. None of the injuries were life-threatening, fortunately. The bus, though, was knocked onto its side when the dump truck apparently ran a red light and broadsided the bus.

The police immediately began an investigation. But the school district superintendent stepped up and demanded the Compliance Investigation Unit of the Florida Highway Patrol get involved and investigate the company, inspect each and every one of the construction firm’s trucks, and look into its fleet maintenance program and practices, and its commercial motor vehicle operator hiring practices. 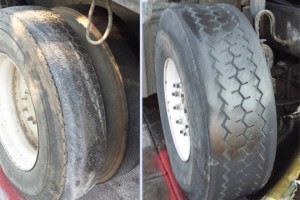 One look at the dump truck’s tires should be sufficient.

“Thanks to the bus driver’s quick reaction, as well as the design of the bus, the students and adults inside were able to safely walk away,” said Superintendent Malcolm Thomas. “From the images of the tires we have all seen in the media, that truck should not have been on the road. No motorist should have to worry that a truck coming up the road toward them is unsafe.”

As you can see by the accompanying photos, which were posted on northescambia.com, both front and rear tires on the dump were nearly 100% bald. And one inside dual was missing. 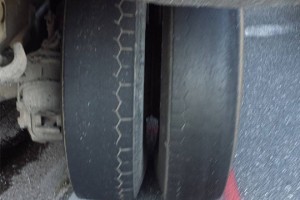 Worse…G.B. Green Construction is a small firm, with less than 10 employees. Which means they don’t service their own tires. They rely on an outside resource, one that failed.

And that failure may have had incredibly tragic consequences.

We’ve been keeping an eye on the labor turmoil that has impacted both Kumho and Hankook tire plants in South Korea. News about the plant strikes and shutdowns is sketchy, but such labor strife has become all-too common for South Korean tiremakers, and this current test brought the following editorial in The Korea Herald, published on Sept. 8:

The labor dispute at Kumho Tire Co., which forced the management to impose a lockout at its three plants, reveals the problems with the unions of many big Korean companies – they are overly protected and excessively selfish.

It is not the first time that the nation’s second-largest tire-maker has been embroiled in a severe labor dispute. Its union is notorious for its hardline stance and the company has a long history of serious disputes that have resulted in strikes and lockouts.

The union’s militancy and “we-only-care-about-our-paychecks” attitude did not let up even when the company was under a debt workout program between May 2010 and December last year.

The unionists staged partial and full strikes nine times during the period, with a 2011 strike inviting a lockout from the management. No worker with common sense would dare halt work when their company is under a creditor-imposed debt restructuring program – which in reality is a last resort to avert bankruptcy.

With the help of the creditor banks, which provided rescue loans totaling about 950 billion won ($790 million), Kumho could was able to graduate from the workout program on Dec. 23 last year.

The very next day, its union launched a strike, demanding the management make up for their “sacrifices,” including pay cuts, during the workout period. This led to a 25.6-percent pay raise, and now Kumho workers receive an average annual pay of 64 million won, higher than the industry leader Hankook Tire.

Never satisfied, the union is now demanding an 8.3% pay raise and performance-based bonus. It also demands 4.5 million won per worker – 1.5 million won more than that offered by the management – in return for agreeing to introduce a wage peak system in 2016. In contrast, both Hankook and Nexen have already adopted a wage peak system in preparation for the extension of the legal retirement age to 60 next year.

By all appearances, it looks like a story of a successful company in a booming industry. The reality is the opposite: Kumho’s sales in the first half of this year dropped 12% on-year and its operating profit plunged by 50%. Its ratio of operating profit to sales slipped to 6.4%, even behind the third player in the market – Nexen Tire.

Company officials said losses from the latest strike that began Aug. 17 amounted to 94 billion won ($78 million) and workers had to give up an average of 2.5 million won in pay for staying out of work.

The case of Kumho union, along with labor disputes at the nation’s three major shipbuilding companies – Hyundai, Daewoo and Samsung – adds to the urgency to make the ongoing work to reform the nation’s rigid labor market a success.

Like Kumho workers, the unionists at the shipyards are well paid and protected – to the extent that they are called “unions of nobles” – but they have called a joint strike Wednesday, in total disregard for the worst slump in global shipbuilding business in years.

The union of Hyundai Heavy, which staged a partial strike last Friday, is even offering gift certificates to members participating in the strike because of the low support – its Aug. 26 strike drew only 17% of members. This is happening at a company that posted a loss for the past seven consecutive quarters.

Korea took 57th place in the labor relations rankings of the latest IMD World Competitiveness Yearbook. It is unlikely to get a higher ranking next time round.

If one only paid attention to the tire industry, it would be easy to see what’s happening in the large equipment world.

Michelin North America recently announced that it was mothballing its barely broken-in giant OTR plant in Starr, S.C., a gem of a facility that saw its grand opening in 2013.

For months, Titan International has been fighting a dual battle with a tightening ag tire market and sharp downturns in mining and oil processing in northern Canada.

Now Bridgestone Americas, which opened a shiny new giant OTR tire plant in Aiken, S.C., this past December, is keeping a close eye on market shifts. Bridgestone also operates an OTR tire plant in Bloomington, Ill., not too far from the Peoria home of Caterpillar, which earlier this month laid off 230 workers at its at its East Peoria plant, part of a 10,000-person global cutback that will roll out over the next three years.

Obviously, the folks in Illinois are nervous, wondering if Cat’s cuts will impact Bridgestone, which is one of the equipment producer’s largest tire suppliers.

“The difficulties and challenges within the mining and construction industries are forcing strong companies to make tough and unexpected decisions,” Bridgestone said in a statement issued to local media. “We can’t predict the future but continue to monitor current market conditions and future forecasts across all segments of our business with particular focus on serving our customers. We remain prudent in reviewing production schedules and will adjust as conditions warrant.”

Opened in 1965, Bridgestone’s Bloomington plant employs 400, and produces both bias and radial OTR tires used on above-ground mining, construction and oil sands equipment. Over the past two years, the tiremaker has made nearly $50 million in improvements at the plant.

The nervousness you detect is certainly on every OTR tire producers’ radar. We’ll see if things improve as we move into the new year.