Baja Racing: Not For the Faint of Heart - Tire Review Magazine

Baja Racing: Not For the Faint of Heart

I had only one thought while standing in the middle of the Mexican desert.
How on earth did I get here?
I guess the logical answer was it took a cross-country flight and then a two-hour drive along the Pacific coast.
But I mean really. The middle of Mexico? Somewhere along the 1,000 miles that constitutes the famed Baja off-road course, in 90Þ heat, with dirt and cacti in every direction?
How did I get there? Bad things, man. Bad things.
In truth, I got there by way of a ride-and-drive put on by Yokohama. The intro for the new Geolandar A/T+. I’ve been on your proverbial ride-and-drives before, but they usually entailed fast cars, closed tracks and maybe some water – if you were lucky. To say that I was unprepared for what Yokohama was throwing at me is an understatement.
To say that I was unprepared to drive a Baja tour car is also an understatement. Slightly more than 2,700 pounds. Porsche two-liter off-road prepped motor. A four-speed transaxle racing gearbox. Custom rack and pinion steering with RAM assist and 1.5-to-1 speed steer. Twenty-eight gallon fuel cell. And most importantly – for our trip anyway ®“ were the 33×12.5/15 dual-terrain Geolandar A/T+ tires.
Granted, the types of vehicles that Geolandar was designed for – Chevy Blazer, Ford Ranger, Honda Passport, Jeep Cherokee, Nissan Pathfinder, etc. ®“ will never see the types of the terrain the Baja peninsula offers. But that was the point.
“Yes, that was the purpose of the trip,” said Rick Brennan, Yokohama’s product planning manager, after the event. ®We wanted you to experience and understand both extremes, and capabilities of the Geolandar A/T+ tire.
“Everyone on the trip was transported in vehicles that were mounted with Geolandar A/T+ tires. This was so you would be able to experience the highway features and benefits of this product – a smooth, comfortable ride without a significant amount of noise. The varied off-road terrains served as a testament to the strength and durability of this tire and the kind of punishment it can take if the circumstances warrant that.”
The point was to test the capability of the tires. To let a group of writers test the tires on some of the toughest surfaces on earth. In essence, Yokohama wanted us to beat the hell out of the Geolandar and see who could take more – us or the tire.
“Although we hadn’t thought of it that way, the fact that the tire can adjust to the varied terrains, it really compensates the rough ride for the driver,” said Brennan. ®This tire can take what you can dish out and still provide a great ride for the driver and/or passenger.®
So we drove. And drove. And drove. For eight hours we drove. Seven cars caravaning across the Baja, sometimes spread out as far as two miles or more. Over dirt, rock, washouts, ruts, gullies, riverbeds, and creeks. Past mountains, plants, farms, wild horses and the occasional kid on a bicycle. All at speeds I didn’t think were possible over that kind of terrain.
Yokohama wanted to make sure every aspect of the tire was analyzed. The deeper center grooves for increased traction in mud and snow. A patented multi-step groove system to increase the surface area of the groove for improved grip on- and off-road. The long, curved shoulder blocks for on-road cornering, enhanced steering response and more even wear. A high-contact center block that utilizes smaller blocks to reduce noise.
“Ever since we launched the Geolandar line of tires, the all-terrain (A/T) tire has been very popular,” Brennan said. ®The A/T, with its aggressive look and on-and off-road capabilities, has been a favorite with consumers.
“This prompted us to make the enhancements we did to our all-terrain offering and launch the Geolandar A/T+. The new tread compound, deeper center blocks and the multi-step grooves are all features that make this tire an outstanding all-terrain performer. This tire is an all-season tire that uses the latest Yokohama technology to deliver long-lasting performance both off and on the road.”
At the end of an exhaustive day of riding, driving, being harnessed to a bouncing car, breathing through an air tube connected to the helmet and losing three pounds because of the heat, one thing was for certain. Of the 28 tires that started the course in the morning, only one went flat. And that was only after 30-pound rock cut a four-inch gash into the side wall.®′ 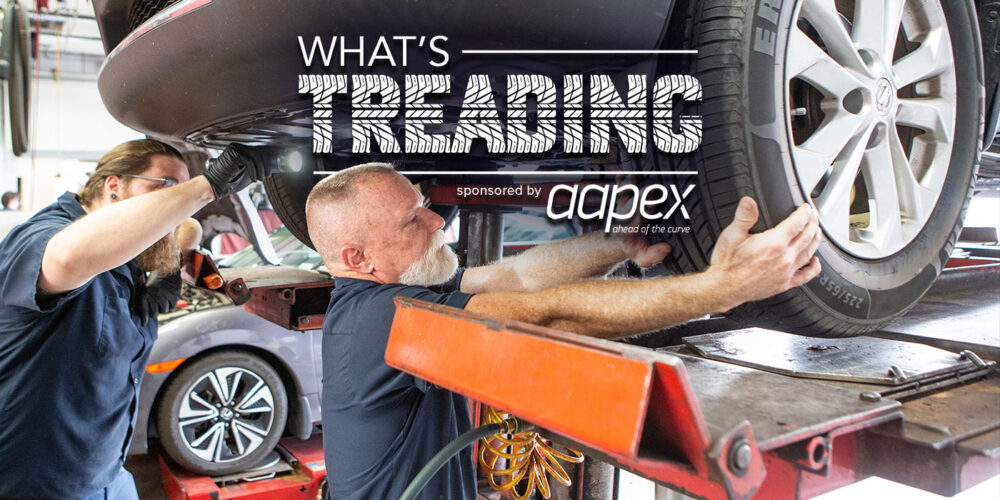 As we head into a new year, there’s definitely some skepticism about what the tire industry—and the economy as a whole—has in store. I mean, we’re still recovering from the pandemic, and this year is slated to be the first “normal year” in a while. With that, though, comes both challenges and opportunities for independent tire dealers across North America. Yet, tire dealers tell us that one thing is for sure: the tire business will remain resilient.