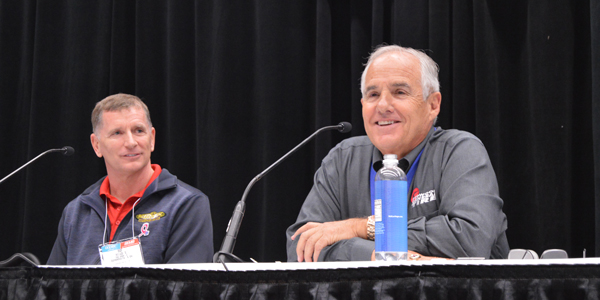 During the 2019 SEMA Show, the Tire Industry Association (TIA) hosted its annual “Tires at 2” seminar in which tire dealers shared their secrets to success.

Speaking to a full house, Alpio Barbara, 2019 Tire Review Top Shop winner and owner of Redwood General Tire in Redwood City, Calif., and Bob Kellogg, president of Warren Tire in upstate New York and Tire Business’ Tire Dealer Humanitarian of the Year, discussed ways their business has been successful and how other dealers can take advantage of opportunities in the industry and their communities.

Both Barbara and Kellogg emphasized community involvement as a pillar in the success of their business.

“Being in a Top Shop, what you really have to do is be involved in your community. If you’re involved, your shop’s going to be great because you’re going to do stuff in your store that the community loves, and then they’re going to come and support you,” Barbara said.

Among the ways Redwood General Tire gives back are hosting a toy drive during the Christmas season and being involved in local clubs and organizations.

“You have to do whatever it takes to get involved and talk about your store,” Barbara said. “Whether you get a haircut or wherever you’re going, just talk about it, and they’re going to come to you.”

Since Warren Tire was founded in 1983, Kellogg said the now 16-location dealership has been involved in the community, which has helped it grow to where it is today. Among the various charitable organizations Warren Tire works with, a handful include Operation Santa Claus, the SPCA, the American Red Cross, Double H Ranch, the American Cancer Society and the Wait House, which is where the company decided to donate $2,5000 for being named the Humanitarian of the Year.

“It’s not always just writing a check,” said Kellogg. “That’s something that most anyone can do. There’s a lot of programs that we’re involved with, and it’s helped to grow our business because we’re well thought of in the community. It’s just the right thing to do.”

Barbara said Redwood General Tire not only has “the latest and greatest equipment,” but also offers employees profit sharing, 401ks and gas allowances. In the San Francisco Bay Area where his shop is located, competition for qualified in employees is fierce with the going rate for an entry-level tire changer at $22 per hour. In addition to benefits, Barbara also provides daily uniforms for each of his employees among other perks.

“We have everything that everyone else has to offer, but really, you have to try to make it as family-oriented as you can. We do barbecues once a month. The managers take their guys out to lunch once a month, and sometimes they go out at night,” he said.

Due to New York state’s minimum wage law requirements, Kellogg said he pays his entry-level employees $15 per hour; however, with 60% of their employees with them for 10 or more years, Warren Tire isn’t “a flat-rate shop” either, he says.

“We also pay all of our employees—our techs, general service advisors and our sales staff—commission so they can make more on top of that,” he said.

Kellogg’s daughter, Megan, the company’s marking manager who joined him on stage for the presentation, said the dealership also gives back to its employees. The family delivers around 130 turkeys to its employees during Thanksgiving and hams during Christmas. Warren Tire also hosts company picnics and an annual trip to Six Flags for its employees, their families and friends.

Sending Business to Another Shop

Both Barbara and Kellogg agree to never send customers to another shop. Even for custom work, Barbara said Redwood General will work with the customer on ordering what they want for their vehicle, instruct the customer to have it shipped to the store and collect on the service fees.

“We’re not making any money,” Barbara says. “A lot of times, we’ve had customers call in their order, we put them on the phone, and just say have it shipped to us. We’ll just charge for the mount and balance.”

Kellogg agreed saying citing an instance in particular where the dealership acquired a shop and changed the mindset there from sending customers away to accepting them. He said that the shop doubled its sales in six years.

Both dealers also agreed on installing tires customers order online. With that business, customers get familiar with the shop, you can sell them an alignment and hopefully gain their other mechanic work down the road, which translates into profit for your business.

“We take that, and we say while they’re here, we’re going to show you why we could do the same deal. We’re going to match it anyways, and the person knows to come to us next time because they know a familiar face, your manager, your mechanic. It’s like your doctor. They start to build a relationship,” Kellogg said.

Barbara and Kellogg pointed to cable TV ads and social media as the ways their shops are gaining traction nowadays.

Redwood General Tire focuses its advertising efforts on Facebook and cable. On using social media, Barbara says one of his employees has control over the shop’s accounts and is given a budget each year.

Kellogg said the dealership meets with each of its advertising account reps in December and plans its ads for the entire year.

“We know when our events are going to be, when the run dates are for those ads or promotions and how much the budget is going to be for those. We get the times that we want. If you’re last-minute putting sales together, and then you’re trying to get certain spots, sometimes you can get bumped or you could pay a premium,” he said.

Megan Kellogg said introducing the company’s employees on social media as well as posting about the shop’s unofficial mascot, Bob’s dog, Dozer, has helped the company’s social media platforms gain traction. The company also has pre-holiday sales and spring and fall tent sales, where customers can win prizes. From these sales, the dealership asks customers how they heard about the business to better track the success of its marketing efforts. Plus, the sale events pit Warren Tire’s 16 stores against each other in sales, which creates for healthy competition among the locations.

Another marketing technique that has helped Redwood General is giving away swag like ChapStick in the summer, reusable bags (since California banned single-use plastic bags) and reusable straws. Known as “the Big Red ‘G’” in Silicon Valley, the shop also sponsors community events to get its name out.

“We do a lot of marketing community,” he says. “Try not to say ‘no,’ as long as it’s within your budget.”

“They will not let you get past that part, whether it’s social media, the internet… You have to ask that question and you can’t bypass it,” Barbara says.

At Redwood General, Barbara says the shop has internet access, five workstations, an 80-in. TV and massage chairs for customers to elect to wait for their vehicle.

“You should have internet access. You should have a workstation for your clients to sit down and do some work,” Barbara advises. “What’s really neat about it is that customers will come in and they get so involved, you could tell them, ‘your car, be done in a minute,’ and they say, ‘Ok, that’s fine. I want to be here another hour… We really make it easy for our customers.”

If customers don’t want to wait, the shop has now adopted the practice of paying for an Uber ride for the customer’s trip to work.

“It’s a lot easier,” Barbara said. “We don’t have to send a guy out because that can take 45 minutes.”

Kellogg said Warren Tire locations offer to drive customers to work. With both urban and rural locations, the dealership sees a mix of people who wait at the shop for their vehicle to those that want to be shuttled to work.

Both shops agreed that a job well done outdoes speed any day.

“We don’t rush. That’ll get you in trouble,” Barbara says. “In our industry, we think everything is fast so it’s good. People think you just plug it in and go. We don’t do that. We have to explain it. We get ourselves in more trouble by not really telling [customers] how we do things because we’re so eager to make the sale.”

At Warren Tire, “we tell customers it’s an hour for four tires, and we do a free alignment check,” says Kellogg.

He said his shop can do an alignment check in five minutes, explains the adjustments to customers that need to be made and tells then that the adjustments will take an hour and a half to two hours.