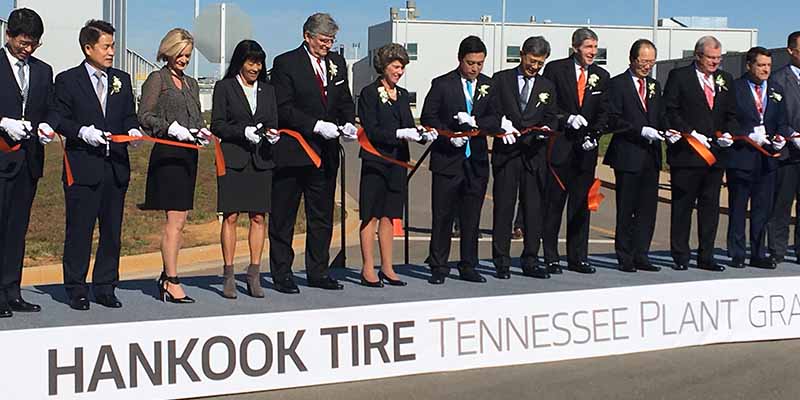 Hundreds gathered in Clarksville, Tenn., on Oct. 17 to take part in the opening of Hankook Tire’s new $800 million tire manufacturing facility with a ceremonial ribbon cutting and celebration. The event included a formal presentation followed by a luncheon and plant tours, attended by Hankook executive leadership and team members, state and local dignitaries, tire dealers, U.S. military veterans, among others. The plant is the first manufacturing facility in the United States for the South Korean-headquartered tiremaker. The milestone opening is described as an important step to build on the company’s momentum in its quest to be a top-tier brand with a strong presence in the North American marketplace.

The 1.5 million square foot facility, which sits on 469 acres, has already begun production of the tiremaker’s Kinergy PT premium touring all-season tire designed for passenger cars and light trucks, produced in 14- to 21-inch sizes. Current tire production is at 5,000 units daily, which will ramp up to 15,000 units by April 2018 once Phase 1 is complete, an estimated 5.5 million units annually. Officials within Hankook are already preparing for expansion into Phase 2, which would allow for double the plant’s production capacity, though no specific timeline was shared.

Inside the new factory, tire production is mostly automated, with overhead monorails and sky cranes distributing tires to each process station and autonomous carts crowding the aisles, distributing materials to stations at the press of a button by the equipment operator/supervisor. Cycle time is a little over a minute and cure times average 10 to 15 minutes. Large screens overhead share progress and messages to team members. Workers at each production station monitor the automated process and address any corrective actions required. Even trailer and container loading is automated — an empty trailer takes approximately 40 minutes to fill, with the ability to ship out 28,000 units daily. The facility includes space for the storage of 350,000 tires.

“The new Tennessee Plant signifies Hankook Tire’s growing business in the United States and continued journey toward being a global leader in the tire industry,” said Seung Hwa Suh, Global CEO of Hankook Tire. “Our investment in the U.S. is part of our ongoing commitment to innovation, state-of-the-art technology and service for our customers. This high-tech, sustainable facility will enable Hankook to execute every phase of business in the U.S., from R&D to production and sales.”

The plant has already brought nearly 1,000 jobs to the local economy, a total that is expected to climb to 1,800 as infrastructure expands. In addition, Hankook moved its American headquarters to Nashville last year and has hired more than 100 local employees to oversee operations there.