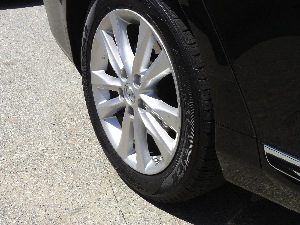 In its first major overhaul of its Assurance line, Goodyear has launched the all-new Assu­rance ComforTred Touring.

First announced at Goodyear’s annual dealer meeting earlier this year, the line got its formal send off during a special dealer and media driving event held in early May in Monterey, Calif. Attendees were able to try out the new tire along the winding Pacific Coast Highway and test wet traction and ride comfort in special exercises set up in the parking lot of a nearby college.

The Assurance ComforTred Touring not only broadens the line’s coverage – up to 93% of target vehicles with just 34 total sizes – Good­year says the new product simplifies both “retailer inventories and tire buying for consumers.”

“Consumers want choices, but they also demand that the choices be clear and easy to understand. That is why we continue to work toward streamlining our lineup of auto tires, making the features-and-benefits message clear for those who are shopping for a new set of tires,” said Scott Rogers, Goodyear’s chief marketing officer for consumer tires.

The new ComforTred Touring – with T, H and V speed ratings – is now available to Goodyear dealers in North America. Fourteen sizes are currently available, and the remaining 20 sizes will be in stock by July, Good­year said. The line covers 15- through 18-inch wheel diameters with one extra-load size. No run-flat sizes are planned, the company said.

The original Assurance ComforTred was launched in 2004, and, according to Goodyear brand manager Michelle Dukeman, the ComforTred name still resonates with consumers. Dukeman said the company did extensive awareness and preference testing with consumers, and the line’s moniker remained a positive one with buyers.

Good thing, as Dukeman pointed out the Com­for­Tred’s market has expanded. Since 2004, the touring segment has gone from 8% of the replacement tire market to 25% today, she said, while the H/V-rated portion of the market has grown from 36% six years ago to 46% today.

ComforTred Touring, she said, was developed for both everyday drivers and more refined users, both of whom desire a “high quality driving experience.” Driving that experience, according to lead engineer Keith Grabo, are an all-new tread design and tread compounds, a new mold shape and interior construction, and some new technology.

The new all-season tire features an asymmetric tread pattern with four circumferential grooves, siping and angled grooves. The line’s “Com­fort Layer” under the tread has been bolstered to provide, on average, 20% “more cushion than standard tires, for a smooth, comfortable ride,” Grabo said.

An all-new tread compound and tread pattern combine for longer tread life and improved fuel economy over the previous model, while a new mold shape and interior construction enhance reliability and stability.

New is Goodyear’s “ComfortEdge” sidewall technology comfort layer and an inner handling layer. The outer layer has an insert that helps absorb road vibration in straight-ahead driving, while a stiffer rubber material aids stability and handling.

While intended as a replacement for the original Assurance Comfor­Tred, Dukeman said that eight sizes of the original will remain in the line-up for direct OE replacement. The new ComforTred Touring is being offered for OE fitment.

Goodyear is supporting the launch with new consumer magazine and TV ads and online efforts, as well as dealer POS kits and training. Some new promotional technology is also being employed in the form of Microsoft’s new Tag barcode technology. Microsoft Tag technology is a unique 2D barcode technology that will appear on ads and POS stands that allows people to scan the code with their smartphones to receive additional product information, photos, videos or coupons.