This time I’m going to present some basics about slip angles and how they affect you and your tire customer.

Let’sbegin by considering a car going through a corner. As the carprogresses through the corner, there is centrifugal force acting on thecar (and its passengers), which tends to pull the car toward theoutside of the turn.

No matter, the car does not slide off theroad, but instead continues around the corner until it reaches theexit. The reason for this is there is a frictional force that opposesor counteracts the centrifugal force. This frictional force is called“cornering force,” and is generated at every point at which the vehicletouches the road.

Thanks to today’s technology, there are manytread blocks cut at different angles and a lot of tread void to helpget rid of water, snow, mud, etc. In other words, the chances ofslipping off the road are less today than they were 20 years ago.

Stillthe laws of physics don’t change and tire engineers are completelyattuned to changes they employed in 2009 compared to 1979. It’s a worldof difference, but still the same in so many ways.

For example,tires – and only tires – can generate cornering force since they arethe only part of the vehicle that actually touches the road surface.

Infact, every cornering force, braking force, acceleration force and eventhe weight of the car is transferred to the road surface through itstire footprint.

Cornering force is the most important part ofhandling because a vehicle cannot go around corners without it. Thereare two ways in which a tire can generate cornering force. The mostimportant of these is through the use of a slip angle.

The second way a tire can generate cornering force is by camber thrust, which we’ll explain at a later date.

Next,let’s look at several examples to try to understand the relationshipbetween cornering force and slip angle. If a tire is rolling straightahead, it is traveling the same direction that it is pointing. Bydefinition, this is zero slip angle (and therefore zero corneringforce). A tread element entering the footprint will travel through thefootprint on a path parallel to the direction of travel. Theoretically,straight and true.

When a tire is cornering, the direction thatthe tire is pointing will not be exactly the same as the direction itis actually traveling. The difference between these directions is theslip angle.

To make this all work in everyday driving, treadelements must deflect away from the tire centerline, generating a smallcornering force. The farther the elements deflect, the more corneringforce they generate. Adding up the cornering force of each individualtread element results in the total cornering force of the tire.

Sum of Forces
It’s hard to get your brain around some of this, but stay with me. 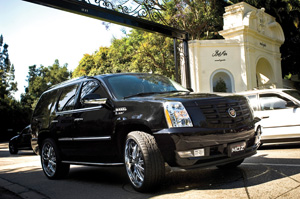 Centrifugal force is also determined by theradius of the curve. So, if two corners are driven at the same speed, agentle bend in the road will require less slip angle than a very sharpturn.

But what happens to the forces in the footprint when asharp corner is taken at higher speeds? For openers, the slip anglebecomes so large that the tread elements at the rear of the footprintcannot deflect far enough and they begin to slide on the pavement.

Sinceless force is actually required to keep an element from sliding thanwas required to get it to begin sliding, the footprint will notgenerate maximum force.

The sum of these forces has now shiftedtoward the front of the footprint, which reduces self-aligning torque.This effect reduces the effort needed to hold the steering wheel at itsturned position.

In other words, the cornering force a tiregenerates depends on the slip angle. We see that as the slip anglebecomes larger, the forces become higher – but only to a point.

Max Cornering
Atthe tire’s maximum cornering force, an increased slip angle will resultin a reduction in the cornering force. But slip angles this large areseen only rarely by most motorists, such as an accident avoidancemaneuver.

Large slip angles are the rule for racing, though, anda race driver must be able to drive near the peak cornering force.Drivers who corner using slip angles far past the point of maximumcorning are over-driving their tires.

Note that a tread blockgenerates its maximum cornering force just as it begins to slide. Youmight have figured out that the tread blocks at the front of thefootprint haven’t been deflected enough to generate maximum corneringforce, while at the back they are slipping too much.

There isonly a small area near the middle of the footprint that is generatingmaximum cornering force. Engineers call this the “pneumatic trail” anda driver can tell when this trail has decreased significantly, meaninga reduction in self-aligning torque.

In some cases, thecornering force can move ahead of the axle centerline, which would tendto turn the steering wheel even more into the turn.

A lowaspect-ratio tire has a much larger middle footprint, which permitsmore tread blocks to generate maximum cornering force.

That’swhy a 40-series tire can generate more cornering force than a 50-seriestire and far more than a 70-series tire even though it doesn’t put anymore rubber on the road.

Simplyput, it’s all about cornering force and slip angles. But, in fact, thereality of the engineering that goes into slip angle and handling isvery complicated and can be confusing.

Remember, too, thatwhen you’re talking to your customers, remind them that a standardtire’s footprint is considerably smaller than an 8×11 piece of paper.

It’sonly because of things like slip angle and cornering force thatengineers can turn four small patches of tread into safe transportation.