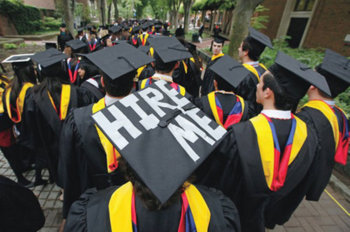 An incomplete economic recovery continues to hamper the industry, but potential China tire tariffs pose a greater threat to the tire market future

“Economic well-being requires a certain level of optimism, a firm belief that success is possible, even when times are hard. Markets crash. Businesses fail. But if people today are unwilling to take measured chances, we haven’t recovered at all. That may affect career and investment decisions for decades.”
– BusinessWeek

So after all that you have read in this special issue, what do we see going forward?

While certainly, as our panel of experts indicates, the picture is rosier, there are still pockets of concern. – and still disagreements as to what the tea leaves really mean.

Chief among the worries today are the fate of imported tires produced in China and “The Recovery.” There are many layers to these concerns, and some of the background issues run excep­tionally deep.

But whether you’re talking about employment, age demographics, retailer health, the stock markets, retailer health, market fairness, labor and manufacturing, costing and pricing and many other concerns, in our view, one can trace back to these two situations as the core of how the U.S. tire market will roll over the next few years.

Where is My Recovery?

The numbers say that we’re well on our way to a healthy, growing econo­my. U.S. stock markets are riding high, with the S&P 500 inching ever closer to maintaining a 2,000 level and the Dow Industrials flirting with a solid 17,000, sure signs, many feel, that happy days are indeed here again.

The numbers also say that there remain many critical problems – not the least of which is psychological – that are serious roadblocks to a com­p­lete recovery. If the stock markets are the lone measure, then continuous chatter among “experts” that a sharp free-fall is just around the bend (a 6,000 Dow anyone?) means that the skies above may not be all that clear again.

Perhaps most concerning is the psyche of the American public. Rem­em­ber, ours is still a products and services-driven economy. Americans cut their spending at the first hint of trouble and are slow to the cash reg­isters when the smoke clears.

And while there has been retail and wholesale improvement during the last 18 months, nearly 50% of Americans believe we’re still firmly in a recession, according to a recent Wall Street Journal poll. A separate June survey found that only 39% of Americans felt the economy was improving; 56% said it was getting worse.

“The economic recovery cannot be measured only by market returns, growth in gross domestic product, and housing starts,” a recent BusinessWeek story read. “Psychology counts. Height­ened fear can hurt career and investment decisions for decades. Put another way, economic well-being requires a certain level of optimism, a firm belief that success is possible, even when times are hard. Markets crash. Businesses fail. But if people today are unwilling to take measured chances, we haven’t recovered at all. That may affect career and investment decisions for decades.”

Like the fits and starts that have dot­ted the U.S. economy of the last seven years, positive and negative takes on “The Recovery” come in similar bits and pieces. Added up, it is little wonder that Americans are screaming loudly:

“Where is my recovery?” 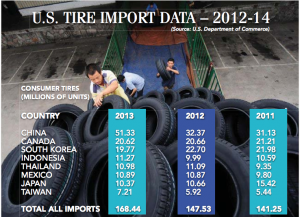 As I sit here writing this, weeks before you will read it, I realize that the reality on the day you read may not follow the narrative, but frankly until actual ac­tion is taken, all anyone can do is guess. So here it goes.

First, let’s settle on this: There will most definitely be an additional tariff placed on consumer tires imported from China. Not just Chinese-branded tires, but any P-metric or LT-metric tire pro­duc­ed there that ends up here. It’s a done deal, decided seconds after the petition first reached the Commerce Department.

How large a tariff will depend on how much the Commerce Depart­ment and International Trade Commission feel the American tire industry has been “mat­erially injured or threatened with material injury” because of these tires, which the USW claims are being sold here at less than “fair value” and are allegedly sub­sidized by the government of China.

Some observers rightfully point to the question of subsidies by the Chinese government. There is little doubt that Beijing aids its tire industry, as it does for much of its industrial base. In fact, if you dig deep enough you’ll discover that the Chinese government is at least a part owner of hundreds of product manufact­urers – including tiremakers.

China is a still-growing economy, building up in both volume and tech­nology to service a population five times that of the U.S., a population that has the same aspirations Americans have held dear for decades.

It has emphasized the automobile and tire industries as key to its overall growth, and it has taken steps – finan­cially and via regulation – to weed out the weak, low tech players and help the stronger auto- and tiremakers become world-class producers.

China is not the first or only govern­ment to help its industrial base. What are we to make of the tax abatements, infra­structure improvements, “training” money and other incentives, and allow­able tax deductions showered down on tiremakers in the U.S. (regard­less of their country of origin) as pot sweeteners to either land a new plant or keep an existing plant planted?

Aren’t those, in fact, government subsidies? How do those investments impact tire pricing? Or do those offsets simply fall to the corporate bottom lines that have been quite robust in recent years?

You’ll recall the tiered administrative action of the 2010-12 period, where Chinese-produced consumer tires were slapped with 35%-30%-25% added tariffs. With the tariff, American consumers were paying an additional tax on their tire purchases, and, unfortunately, at one of the worst economic periods in our history.

The result? No new tire plants. No new tire jobs. Not anything the USW purported was their cause.

The eternal question on the rapid growth of Chinese brands in the U.S. is a chicken-and-egg quandary: Have we been importing more China-produced con­sumer tires because of lower acqui­sition costs or because tire buyers can-­ not afford high-priced premium lines?

If it were the latter, then would it not make sense for U.S. manufacturers to return a certain level of “broadline” tire production to this continent? If it is the former, then based on our competitive economic system, a laissez-faire app­roach should prevail.

Certainly, once the last tariff came off in September 2012, imports of con­sumer tires from China jumped 36.9%. At the close of 2013, China-made products represented 30.5% of all consumer tires imported into the U.S. and 22.6% of the entire U.S. replacement consumer tire market.

But for comparison sake, consider that 2013 radial truck/­bus tires shipments from China represented 61.6% of all TBR units imported into the U.S. One ind­ustry expert says China now meets 55% of the global demand for truck tires.

Yet, the United Steelworkers – a labor body that purports to stand up for the “little guy” – has focused its resources on the more volatile consumer tire side.

We are not pro-tariff , but we are not anti-American worker. We are pro-choice in that the market and the buyer should determine the outcome.

Any drastic tariff action – regardless of the country of origin – is wholly anti-con­sumer, anti-choice and anti-tire industry, and serves only for the USW to force tire buyers, still stumbling after the Great Recession, to pay artificially higher prices.

American tiremakers (and those of foreign origin) long ago aban­doned the broadline segment that products from China and other countries now fill. Production of those tires – the 14-, 15- and 16-inch radial sizes that remain prevalent in this market – didn’t race back to these shores with the last tariff rise.

The USW’s stated reason for pur­suing the last added tariff proved to be a sham and a shame, and so is this push for what will likely be far a more pun­ish­ing and longer-lasting added tax.

The only thing that any new tariff will cause is massive market disrup­tion, worse than that we experienced between late 2010 and 2013. Tire prices will rise, to be sure, and across the board, particularly on “pre­mium level” tires.

That will bring even more wallet stress to already fragile and wary con­sumers and further business stress on tire dealers – and that may come back to haunt union leadership in the form of lost jobs.

Of course, the other end result will be a move to these shores by two or three Chinese tiremakers – by local acquisition, or by inheriting a U.S. plant through an offshore acquisition, or by planting their flag with a greenfield plant. They want to compete with the best in the world in the toughest market, and they will show up ready to play.

The USW can swat at globalization all it wants, but this is a different world and maybe it needs to take a good look in the mirror. Until consumers show a will­ingness to pay premium prices or union workers accept more manageable wage/benefit structures, high impor­tation rates will be the case.

Today, the USW is fixed on China. Tomorrow?

What the Future Holds