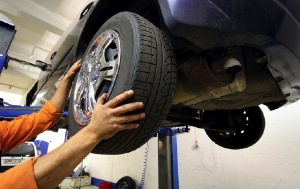 When it’s time to replace only two tires on passenger vehicles, logic should take a back seat to physics – or in this case, a rear axle. Typically, vehicles are shod with four similarly designed and constructed tires of the same size on the front and back. The tread depth of each starts out equal, and inflation pressure matches specifications posted on a vehicle’s information placard label and owner’s manual. However, the equality usually disappears as interaction between vehicle and road takes its toll on the tires. Wear is commonly more pronounced on the front tires of front-wheel-drive vehicles, compared to the tires following behind. Accelera-tion, braking, steering and engine weight combine to scrub off the rubber more quickly up front. Regular tire rotation is designed to be the grand equalizer that helps maintain similar tread depths on the front and rear tires. However, it’s no longer unusual to have customers pass on tire rotations, resulting in the front tires wearing out much sooner than those on the rear, often in half the time. Other forces might be at play to create unequal wear, so it’s important to fully understand why only two tires wear out, according to T.J. Tennent, engineering manager for Firestone consumer and government products at Bridgestone Americas. “Proper tire maintenance goes beyond regular rotations and includes inflation pressure, alignment and other factors,” he said. “If the four tires don’t wear out at the same time, a tire technician owes it to the customer to discover, report and hopefully be able to correct the root cause when replacing the worn-out ones.” At this point, a critical assumption could be made and a dangerous situation created. Common sense, along with past practices, might lead a customer to demand – and a tire technician to conclude – that a new pair of tires should be mounted on the front axle of the vehicle. After all, the front tires wore out first, and there’s still a lot of rubber on the remaining ones that had been on the rear. The logic seems reasonable, maybe even infallible. Put the greatest tread where the powertrain is driving the vehicle, and if luck holds out, the front and rear tires will wear out simultaneously the next time around.

In reality, the exact opposite needs to take place, according to Ron Margadonna, senior technical marketing manager for Michelin North America. “The two new tires should always be placed on the rear axle and the older tires moved to the front.” The reasoning has been proven on test tracks and in labs. It’s all about oversteering, understeering and the physics of a vehicle’s center of gravity. While the explanation requires an understanding of hydroplaning, it also applies to a loss of traction caused by snow or ice. Hydroplaning crops up when water can’t be channeled through a tire’s tread pattern, and the tire doesn’t maintain contact with the road. Worn tires will hydroplane more readily than tires with deeper treads. A loss of traction on a rear axle causes oversteer, which could cause a vehicle to fishtail and kick into a tailspin. A similar loss of traction on the front axle creates understeer, causing the vehicle to keep going in a straight line. For the driver, it’s easier to compensate for understeer; oversteer usually is much more hazardous. It all adds up to the fact that if you have to lose some road grip, it’s better to lose it up front, rather than in the back. Tennent explained why understeer is the safer handling dynamic for the person behind the wheel. “If a driver gets into trouble on the road, the first thing he or she does is lift a foot off the gas and possibly hit the brakes,” he said. “When this occurs, the vehicle’s center of gravity swings forward, puts most of the load on the front axle and lightens the rear axle. The load transfer literally presses the front tires to the ground and assists in maintaining front traction.” He said if the front tires have the least amount of tread depth, the transfer of the vehicle load to the front still occurs, assisting the driver in steering and maintaining some control of the vehicle. At the same time, the rear tires’ deeper tread depths help them evacuate water on the road’s surface and retain proper tracking behind the front tires. “The vehicle may understeer, but it can be controlled in most cases with additional maneuvering and braking.” If the worn tread is on the rear tires and a driver quickly decelerates, the vehicle’s center of gravity still shifts to the front of the vehicle, and the front tires still maintain traction as the newer tread “pumps” away the water. However, the danger lurks behind. The rear worn tires will lose traction and slide around, causing the driver to lose control of the vehicle. Margadonna said the same dynamics apply to front-, rear-, four- and all-wheel drive vehicles. “Oversteer from the loss of grip on the rear axle can develop whether it’s the drive or free axle,” he said, “and similar behavior occurs with bias-ply or radial tires.” If four tires are properly maintained and rotated at the recommended interval of 5,000 to 7,000 miles, the difference in the tread depth on the front and rear tires is insignificant. However, Tennent cautioned that tread wear differences of more than a couple 32nds of an inch on some all-wheel-drive and 4×4 vehicles can cause damage to the vehicle’s differential.

It’s important to note that new rotation rules apply after two new tires are placed on the rear axle, since the front tires now will almost always have less tread than the rear ones. Michelin has a rotation policy for this situation to ensure that the deeper-treaded tires remain on the rear axle, said Margadonna. “When two new tires have been installed on the rear axle, the recommended rotation pattern requires keeping the tires on the same axle, but rotating them from side-to-side,” he said. “This applies after installing two new tires to the rear position or discovering significant tread depth differences between front and rear positions during the recommended rotation interval.” He said a normal four-tire rotation pattern can be performed if there is a 2/32-inch or less tread depth variation across the tread of each individual tire and the same tread depth variation between front and rear tires. No doubt, tires should be replaced in sets of four whenever possible, and they should be regularly maintained following the rotation schedule found in a vehicle’s manual. Explaining the recommended rotation intervals when a tire dealer’s customer is still in the store can help build customer confidence and satisfaction. After the new tire purchase, staying in touch with customers – by phone, e-mail, social media, postcard or mailed coupon – provides an opportunity to have them return for the rotation service.