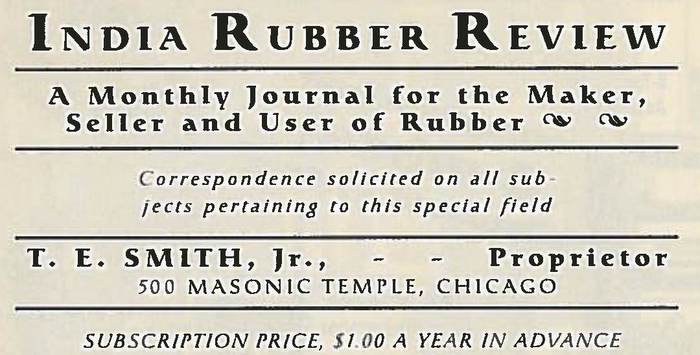 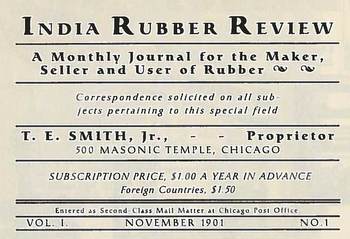 With the natural acceleration of the automobile business and the rapid development of the pneumatic tire, other rubber and tire companies were established in and near Akron. Those already established expanded rapidly and millions of dollars were spent for factory additions and new equipment.

Prior to 1900, practically all rubber came from the jungles of Brazil, although seeds of rubber trees had been transplanted from Brazil to the Kew Gardens in England in 1876 by Sir Henry Wickham, now known as the “Father of Plantation Rubber.” This cultivation resulted in the establishment of the first rubber plantations in the Orient and in 1900 the plantations in the Far East gave their first yield of rubber – four tons. By 1907 these plantation areas were yielding about 1,000 tons annually.

It was about this time that “King Rubber” began to wave his magic wand. He built new kingdoms over night, transformed wastes into thriving settlements and barren lands into beehives of industry. Akron gained the reputation of being the “fastest growing city in the United States.” Rubber factories sprang up almost over night. Vast uncultivated areas of the Orient, once reeking with the stagnation of malaria breeding quagmires were transformed into wonderful rubber plantations and began to yield abundantly of nature’s riches as gigantic oak, camphor and teak trees in the virgin jungles made way for long avenues of rubber trees. Desert stretches with their cacti, sage brush and alkali dust began to make way for fertile cotton plantations to provide cotton for the fabric which is so essential a part of the pneumatic tire.

The once virgin jungles of Sumatra, and the Malay states in the Far East became rich in their growth of the cultivated rubber tree, plantations spreading over millions of acres with thousands of sinewy Sumatran and Malayan coolies employed to collect the milky white juice of the rubber tree, coagu¬late it and prepare it for shipment to Akron’s growing factories. In the sun blistered Salt River valley of Arizona, amid the sand dunes of Southern California and along the peaceful Nile mammoth cotton plantations developed while amid the peaceful environs of New England there sprang up many cotton and spinning mills to make the millions of yards of fabric required in tire building.

Plantation rubber production could scarcely keep apace of the demand, even this, Akron’s centennial year, finding an actual rubber shortage despite the fact that there are today more than 4,000,000 acres devoted to rubber plantations which this year alone will produce more than 400,000 tons of rubber.

Akron’s rubber companies began to expand their ramifications, several of them establishing subsidiary manufacturing companies in foreign countries and in Canada, and locating branches throughout the entire world. 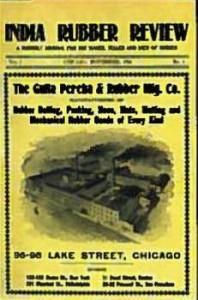 In 1901, Theodore E. Smith founded India Rubber Review, the only rubber journal ever published in Akron and today the recognized tire and rubber authority with world-wide circulation. Mr. Smith transferred editorial and publishing offices to Akron, from Chicago, shortly after founding the magazine, and continued at its helm until 1920 when its control was acquired by Edward S. Babcox. The magazine is published monthly, going to all parts of the world. Mr. Babcox now is president and publisher of the India Rubber Review, with Ralph C. Busbey as vice president and editor; H. H. Harriman as associate editor; W. C. Doerler as secretary and business manager, and Miss H. L. Sanders, circulation manager.

However, it must be stated that men who have been prominent in the rubber industry here have given to the world most of that which has contributed to the great expansion of the industry to its present status. F. A. Seiberling gave the tire industry the first practical tire building machinery, which eliminated the hand method of building tires and greatly accelerated produc¬tion. A. H. Marks developed one of the first successful methods of reclaiming rubber. There are count¬less contributions to the industry such as the work of Dr. W. C. Geer, vice president of the Goodrich Co., in figuring prominently in the development of gas masks for use by the American Expeditionary Forces during the World War; the many tire inventions of J. A. Swinehart; the development of the modern day golf ball and the valuable contributions in this direc¬tion of John Gammeter of the B. F. Goodrich Company; the pioneering in aeronautics and the construction of lighter-than-air craft in Akron under the leadership of F. A. Seiberling and P. W. Litchfield of the Goodyear Co.; the work of John F. Palmer, inventor of one of the first pneumatic bicycle tires ever produced, and inventor also of the cord tire; the pioneering work of Akron tire technicians in developing the first pneumatic tire for buses and trucks and the latest improvement in tire construction—the low air pressure or balloon tire. Akron owes its prestige as the home of “Silvertown” tires to the work of A. H. Marks during the days when the Diamond Rubber Co. was at its peak, prior to its consolidation with Goodrich, for it was largely through the efforts of Mr. Marks that the Silvertown cord tire manufacturing rights were secured for $750,000 cash, by the Diamond Co.

The history of the cord tire, about which most of Akron’s development has centered, is indeed inter¬esting. At a bicycle show held in Philadelphia more than 35 years ago, J. F. Palmer, who later became famous in connection with tire construction, exhibited what then was called a puncture-proof bicycle tire. It was crude in construction but interesting in theory and Goodrich representatives became so impressed with it that they persuaded Mr. Palmer to come to Akron to further develop the tire. After a series of experiments the new tire finally was brought out but the real success of the Palmer bicycle tire, however, was only achieved when Mr. Palmer conceived the idea of using parallel threads or cords in place of a woven fabric. Patents on this method were obtained early in 1893. The B. F. Goodrich Co. was the exclusive manufacturer in the United States for this new Palmer tire but Mr. Palmer issued his patents in a number of foreign countries. In later years, Mr. Palmer used the same cord principle in developing the first cord pneumatic tire for automobiles, a tire which is rapidly replacing the fabric tire.

With the advent of the automobile Christian Gray, then technical director of the India Rubber Co., and Thomas Sloper undertook to produce a clincher auto¬mobile tire, embodying the Palmer bicycle cord principle. Over a dozen patents were taken out by them on this construction, between 1904 and 1911. In 1909 the Diamond Rubber Co. of Akron purchased the American rights under the patents, and the B. F. Goodrich Co. acquired the same rights in 1912 by purchase of the Diamond Rubber Co.

Part 3: A Look Back at the Early Days of the Akron Rubber Industry