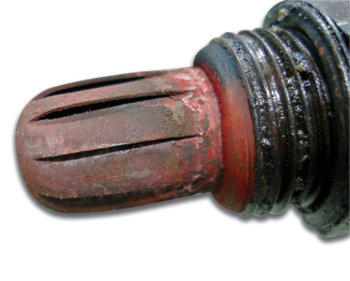 This badly contaminated oxygen sensor produces a biased signal that causes a rich condition after the engine enters closed-loop operation.

With fuel prices rising, the need for accurate air/fuel mixture monitoring is more important than ever. The engine computer needs to know what the fuel mixture is with a high degree of precision so it can optimize fuel economy as well as emissions. If the information received by the powertrain control module (PCM) from its sensors is not accurate, it may command too much fuel or not enough. A rich mixture wastes fuel, while a lean mixture may misfire and waste power (while also causing a big increase in hydrocarbon emissions).

Many late-model imports such as Honda, Toyota, Volkswagen and others use “Air/Fuel” (A/F) sensors rather than conventional oxygen (O2) sensors to monitor the exhaust gases coming out of the engine. What’s the difference? An air/fuel sensor can read a much wider and leaner range of fuel mixtures than a conventional O2 sensor. That’s why they’re also called “wideband” O2 sensors.

Another difference is that A/F sensors don’t produce a voltage signal that suddenly changes on either side of Lambda when the air/fuel goes rich or lean. A conventional O2 sensor will produce either a rich reading (0.8 volts) or a lean reading (0.2 volts) when the fuel mixture changes. An A/F sensor, by comparison, produces a changing current signal that varies in direct proportion to the amount of unburned oxygen in the exhaust.

On Toyotas, the PCM sends a 3.0-volt reference voltage signal to the A/F sensor. A detection circuit inside the PCM then monitors changes in the current flow, and generates an output voltage signal that is proportional to the air/fuel mixture. At Lambda, when the air/fuel mixture is 14.7 to 1 (stoichiometric), the current flow through the sensor is zero.

Another point that can trip up an unwary technician is that the A/F value displayed on a scan tool can be misleading. Many scan tools with “generic” OBD II software automatically convert the PCM’s A/F sensor voltage output to a more familiar 0 to 1 volt scale like that of a conventional O2 sensor. If you are not aware of this fact, and wonder why the voltage reading for the A/F sensor PID seems unresponsive, or does not change as much as you would expect when you create a lean or rich fuel condition, you may wrongly conclude that the A/F sensor is bad. 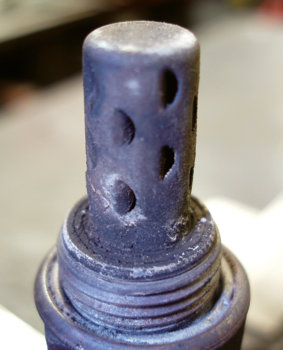 The coat of soot on this unheated oxygen sensor reduces its sensitivity to changes in the air/fuel mixture ratio.

A/F sensors fall prey to the same ailments as ordinary O2 sensors. A contaminated sensor will not produce an accurate signal or generate an accurate air/fuel mixture reading. Sensors can be contaminated by engine coolant from internal coolant leaks (leaky head gasket or cracks in the cylinder head), or by phosphorus if the engine is burning oil. The underlying cause here may be worn valve guides and valve guide seals, and/or worn piston rings or cylinders. Other sources of contamination include RTV sealers that contain high levels of silicone, or certain gasoline additives.

Compression leaks or misfires that allow unburned oxygen to enter the exhaust, and exhaust manifold air leaks, can also mislead the sensor.

Investing in TPMS Tools
Connect with us 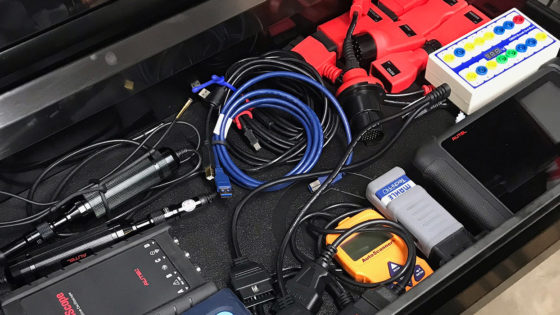 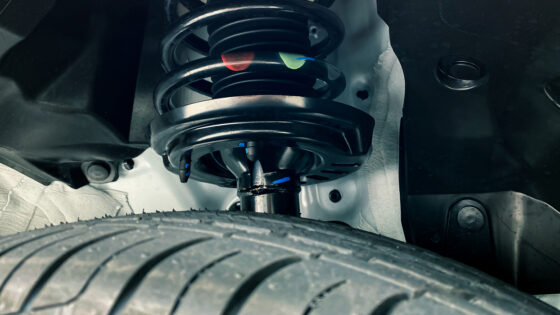