Thepackage of measures implemented were received with a shock: layoffs, massivebudget cutbacks, withdrawal from the Tokyo Motor Show, restrictions on travelfor management and so on. Later it became public knowledge that top managersvoluntarily forewent their bonuses. 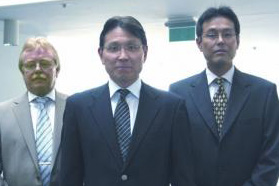 Sincethat time a collective sigh of relief has been breathed that some of therestrictions didn’t turn out to be as severe as first anticipated, and forToyo’s factories in particular the tide has turned. "Our plant utilisationin Japan is already approaching 100%," comments Tatsuo Mitsuhata, 44,executive vice president Toyo Tire Europe. The company’s Japanese competitorsare somewhat lagging in this respect and their recovery not occurring asquickly as Toyo’s, he said.

Admittedly,a complete return to the plans in place before the crisis hasn’t occurred, norhas a rapid execution of all decisions made during the darker months. The newtyre plant planned for a still undetermined location in Southeast Asia willstill be built, but its construction has been postponed.

Toyo’sNitto brand, currently doing well in North America, will one day be a secondbrand for the whole world (including Europe), but given current weak demandsuch a move would at present be untimely.

Instead,in Japan and Europe much attention is focused upon a project that gained verylittle headline space until now: Toyo, a relatively small manufacturer incomparison to some of the major market players, has received OE homologationfrom a premium vehicle manufacturer for its prestige models. This has placedextremely high demands upon the Toyo developers, notes Wilhelm Höppner, whosince this spring has served as technical director of Toyo Tires Europe.

YetHöppner praises his colleagues in Japan for rising to and mastering thischallenge in so short a timeframe; many of the company’s larger competitorswould have experienced difficulties meeting the vehicle manufacturer’sspecifications within the same period. After several niche models Toyo willalso supply OE tyres to a mass market German vehicle, Mitsuhata adds. It has notbeen decided where these tyres will be produced.

Todaynearly all tyres sold within Europe with the Toyo name on the sidewall comefrom the company’s Japanese factories, as the U.S. plant’s capacity isdedicated to supplying the North American market. Several months ago thepresidents of Toyo and competitor Bridgestone also announced a productioncapacity exchange is planned for North and South America, through which Toyotyres will be produced at a Bridgestone plant and vice versa.

Afurther factory – the Cheng Shin-Toyo Tire joint venture plant – has suppliedtyres to the Chinese market. However, in August, Toyo announced changes to itsoperations in China and its plan to set up its own facility in the country.Speaking before the announcement, Höppner commented: "We retain thetechnology for producing high performance and UHP tyres at our two Japaneseplants and our facility in the US. If tyres from our Chinese factory areexported to Europe, to start with they will only be standard tyres."

Theparent company’s April to June quarterly figures – and especially the resultsfor Europe – appear to make sobering reading as it can be seen that Europeansales only amounted to 59% of the turnover generated one year ago. Thesefigures do not at all reflect the recent period in which Sakuramoto has heldthe position of president, Toyo Tires Europe, clarifies Tatsuo Mitsuhata. Mostof the heavy deficits are attributable to the collapsed Russian and Ukrainianmarkets, and while Toyo Tires Europe is the parent company of the U.K.,German-Austrian, Italian and Benelux sales companies, Russia and the Ukraineare directly controlled from Japan.

Inits headquarters in Neuss, near the German city of Düsseldorf, the Europeanoperation overseeing the four sales companies may have also experienced areduced turnover, but its levels of 85% to 90% compared with last year conformwith the market, comments the executive vice president.

Nevertheless,Toyo Tire & Rubber is disappointed, as shortly before the crisis began thecompany had sent a strong team to Russia and the Ukraine to establish thosemarkets, and they have since totally collapsed. Yet Mitsuhata is lookingtowards the future and expects activity to occur in other markets where Toyo asyet boasts no organisation. It is too early to release further details of suchmoves, however.

Itis the job of the 35-person strong team at the European headquarters to supportits own four national organisations along with distributors in other Europeancountries. Fortunately for Toyo, its truck tyres represent only a relativelysmall share of business here and, therefore, the disastrous market conditionswithin the segment did not pose too strong an influence on the company’sresults. The company’s U.K. operations particularly benefited from winning new,strong customers – such as Micheldever Tyres and North East Tyres &Exhausts – and this has placed Toyo in the U.K. in a much better position forcoming stronger out of the crisis than in other European countries.

Interms of products, Toyo feels to be on the right track. A range of innovationsare placing Toyo in a stronger position, from tyres featuring the latest nanotechnologies through to the introduction of an environmentally friendlier tyrewith a recycled material casing, the Proxes NE, from its summer tyre programmeto its brand new all-season tyre range intended for introduction in 2010/11.All are areas in which Toyo’s technical progress is showing itself, andtherefore Mitsuhata is very confident about the company’s future. (Tyres &Accessories)

After Cutbacks, Toyo Now Back on Track