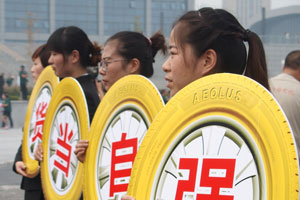 Aeolus Tyre Co. welcomed its OEMs, wholesalers and tire dealers from more than 50 countries to the Chinese city of Jiaozuo to be a part of the tiremaker’s 50th anniversary.

Aeolus kicked off the September celebration at its 50 Anniversary Conference in the Taiji gymnasium with dancing, music and speeches.

During its 50-year celebration, the Chinese tiremaker, originally founded in 1965 as Henan Tyre, discussed plans to reposition itself as a global tire leader and utilize its parent company China National Chemical Co.’s (ChemChina) takeover of Pirelli & C. SpA.

“Fifty years have passed in an instant,” said Aelous Chairman Wang Feng. “For an individual, 50 years is the time from which he can predict his future. For a couple, 50 years means they have loved and supported each other such a long time. For an organization or an enterprise, it mirrors half a century’s ups and downs through which it has voyaged with fortitude and determination.”

The company has seen many ups and downs throughout the last year from successful market increases to the devaluation of the yaun and consumer tires being hit hard by U.S. duties. 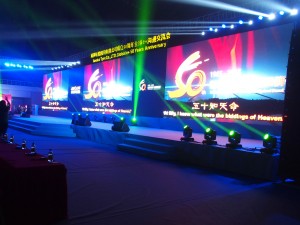 Aeolus celebrates 50 years at the 50 Anniversary Conference in the Taiji gymnasium.

Aeolus’s domestic market is currently doing well. Its domestic replacement market is up 50% in the first half of 2015, said Guo Shuangxing, general manager of international sales and marketing for Aeolus. He added the company plans to recover its total revenue by 2016.

The tiremaker’s domestic OE market is up to 70%, which the company plans to develop even more this year. The company also announced it is looking to expand truck/bus and OTR tire segments in southeast Asia, South Asia, Africa and the Middle East as part of its global strategy.

Chairman Feng said he hopes to utilize the ChemChina/Pirelli deal to speed-up global integration and change bad impressions of Chinese tires, and become a competitor in the global market. Improving China’s global tire value is the biggest challenge.

“Our vision is ‘World-Class Quality, Globally-Recognized Brand.’ Our medium-term goal is to lead the local businesses in quality,” Feng said. “We will fully utilize the opportunity now that ChemChina has become the largest shareholder of the Pirelli tire company. We will strive to make every customer comprehend Aeolus, connect with Aeolus, trust Aeolus, and approve of Aeolus.” 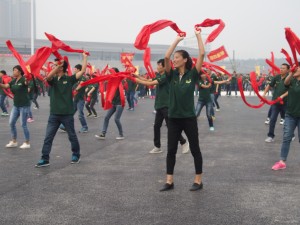 Aeolus celebrates 50 years outside the gymnasium.

Aeolus also announced plans to shift its passenger tire focus to Europe. The tiremaker had been sending passenger tires to the U.S. since 2013 after building up awareness of its truck/bus tires in the states.

Jason Rothstein, general manager for Aeolus North America, confirmed Aeolus has halted sending passenger and light truck tires to the U.S. after it was hit with more than 118% in combined antidumping (87.99%) and countervailing duties (30.87%) on its China-manufactured tires.

“It hurts growth potential,” Rothstein said. “The U.S. is losing out on a major market opportunity.”

Rothstein added that the European market’s focus on quality and performance makes it a good target market to please, and aiming for a “conscious market” will allow Aeolus to do well. Aeolus’s passenger tire sales in Canada and Mexico continue to improve.

As Aeolus now looks at Europe as the company’s No. 1 market for consumer tires, nothing has been confirmed about the possibility of building plants outside of China to produce tires to send to the U.S.

The company did confirm that it has been looking at Eastern Asia countries such as Thailand to build another plant for the past few years.

Rolling with the Numbers: Tire Dealers Tell Us How They’re Dealing with Price Increases