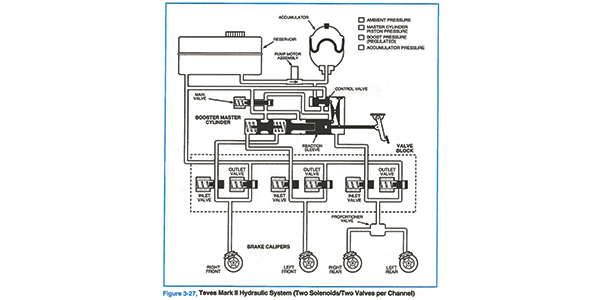 The anti-lock braking system (ABS) computer, or HCU, is a node on a high-speed vehicle bus.

The anti-lock braking system (ABS) computer, or HCU, is a node on a high-speed vehicle bus. This means that the information can be typically accessed through the OBD-II DLC.

ABS is the foundation of the ESC system. ESC systems add software and sensors like yaw, steering angle and even control of the throttle to keep the vehicle under control.

A basic ABS four-channel system will have eight solenoids (four isolation/four dump), or two for each wheel. Some systems will have more solenoids or valves to isolate the master cylinder from the HCU. ESC systems will typically have 12 or more.

When the master cylinder applies pressure, it goes directly to the wheel because the outlet/dump solenoid is closed. This is a normal braking event. The unit is in a “passive” state.

If the system senses a wheel is locked, the inlet/isolation solenoid is closed to prevent any more pressure from the master from reaching the wheel. The

If the wheel does not start to turn, the outlet/dump valve will open. This will release or bleed off the hydraulic pressure that is holding the wheel. The wheel will now rotate.

Since pressure from the master cylinder has been bled off, the pump in the HCU will spool up and apply pressure. The outlet valve is closed and the inlet valve is opened. The pump applies pressure to the wheel.

If the wheel is still outside the wheel slip parameters, the cycle will start over. This happens very quickly. The operation of the solenoids and pump will cause a “kick back” or pulsation in the pedal.

Mechanical issues with the HCU are rare, but they can happen. Valve seats and pintles can become stuck or not seat properly due to debris, corrosion or contaminated brake fluid.

If the inlet/isolation valve is stuck open, it will not affect normal braking in any way. It will only hurt the ABS system. This could lead to a pulling condition during ABS activation.

If an outlet/dump valve is stuck open in one circuit, this could cause a pull condition during normal braking. This is due to the loss of brake pressure at a wheel. Typically, this is not discovered until brake hoses, calipers and other parts have been replaced.

Sometimes a stuck or defective solenoid or pump will set a code. A solenoid has a resistance between 2 and 8 ohms. On some units, it is impossible to access the individual solenoids. Testing the unit with a scan tool with bidirectional control might be the best way to confirm the condition of the HCU.

Most vehicles equipped with ESC will have 12 valves or solenoids in the HCU. Eight solenoids control the wheels. Four additional solenoids can block off the master cylinder and allow the pump to send pressure to a specific wheel.

Understeer is a condition where the wheels are turned, but the vehicle continues to travel in a straight line. This is sometimes described as a push.

The ESC computer would see this event through the sensors. The wheel speed sensors in the front typically read slower than in the rear. The computer would also see that the steering angle is greater than the intended path.

The ESC system needs to intervene before the event occurs, and it needs to anticipate the problem and correct as the vehicle travels.

This is what the ESC sees during an understeer event. The SAS angle is at +52º, this means that the customer has the wheel turned to the right at a significant angle. Even with the steering wheel turned, the yaw and accelerometer read like the vehicle is going straight. The APPS, or throttle pedal position sensor, shows the driver is off the gas and the brake pedal is not pressed.

Why Brake Lines Fail During Winter

Winter is when the ABS HCU has to do the most work to make sure the tires have traction during braking and acceleration. When the ABS activates, the pulsing of pressure can create a hydraulic jackhammer. If a line is weak due to internal or external corrosion, the line will rupture and leak.

Rock salt and deicing brines can corrode brake lines. Automakers have tried galvanization, polymer coatings and physical barriers to stop this corrosion, but these surfaces can’t prevent age and the pecking of road debris from causing corrosion. A hydraulic brake system is only as strong as its weakest connection. Splicing together corroded line does not work in most cases, and replacing just the leaking section will result in a comeback. The best practice is to replace the hard line from the wheel well with an undamaged line. On vehicles with coated line, you must find the area where the coating is still intact.

Another factor influencing brake line replacement is how modern cars are manufactured. In most cases, the brake lines are installed on the unibody, and the subframes for the suspension are fastened to mounting points. Most of these lines are one piece and will go from the HCU or subframe connector to the caliper.

Installing a pre-bent line might be cost prohibitive for the customer because major disassembly is required. One option is to use tubing that can be formed in place. Or, pre-bent tubing can be cut into sections so it can be maneuvered into place without having to remove the subframe. The placement of brake lines is not coincidental.

With ABS-equipped brakes, never take a flare for granted. To seal brake lines against 2,000 psi takes some geometry. The male and female surfaces of the fitting are three to five degrees different between the sealing surfaces. In some cases, the flare is designed to crush or compress onto the surface to form a seal, and the tolerances can stack up quickly against you. An off-center cut combined with a poorly clamped line may look fine to the naked eye, but the connection may leak when it is compressed by the fitting.

ABS Solenoid Diagnosis: What is going on inside the HCU?