Expanding from one store to two is hard enough, but imagine expanding from one to 19 stores in the span of 10 years. If you think that sounds like a daunting task, you’re not alone. But that’s the feat Aaron Telle, owner of Telle Tire & Auto Centers based in St. Louis, Missouri, accomplished after taking over his family’s business in 2009.

The fourth-generation owner of Telle Tire & Auto Centers, Aaron began his career in the tire industry at Telle Tire sweeping floors and shuttling customers in high school. With business savvy at a young age, Aaron began to form strategic relationships in the industry and chart his vision for the company’s growth. When his father, Scott Telle, passed away suddenly in 2009, Aaron was thrust to the helm of the business to carry on its customer-centric, family-focused values. A year later, he acquired Telle Tire’s second store and began to take the business to new heights.

In this episode of Johnny g & Friends, presented by Firestone, Aaron reveals his toolkit for rapid expansion of his family business that’s celebrating its 80th anniversary this year. In this episode, Johnny g and Aaron delve into:

Watch the episode above or on YouTube. You can also subscribe to Johnny g & Friends on  Apple Podcasts, Google Podcasts and Spotify.

Johnny G & Friends: Staying True to Your Mission, Vision & Values as You Grow with K&M Tire

Johnny G & Friends: Passing Down Passion for the Tire Business with Burt Brothers 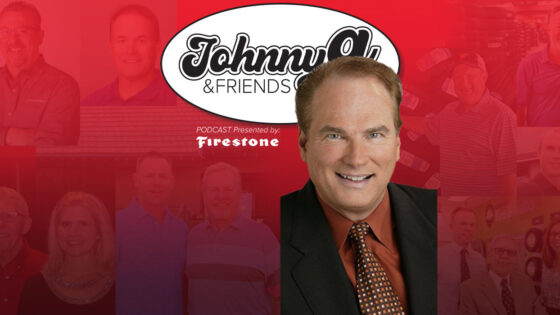