More information has come to light regarding the record $22.8 million award to the estates of a couple killed when a tire repair failure caused a rollover accident. 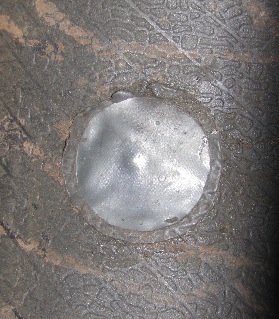 The Jan. 11 jury verdict in a San Diego County Superior Court awarded $14,465,864 to the estate of Casey and Melanie Barber, who were killed in a July 2006 accident. The accident was caused by a failed tire repair, and caused the Barber’s Ford E350 Sportsmobile van to crash on Highway 98 near Page, Ariz.

The San Diego couple sustained fatal injuries, and are survived by their three young sons, who were the plaintiffs in the lawsuit.

In addition to the jury verdict, the Barber estate received another $8.3 million settlement with other defendants.

While records of the case are closed, Tire Review has learned that the faulty tire repair was entirely avoidable. The accompanying photos here – actual photos from the case – show a 1/8-inch puncture outside of the industry standard repairable area.

The puncture was “repaired” using only a patch – no plug of any kind was installed – and the damaged area was in no way prepared – the puncture was not reamed out and the innerliner was not cleaned or scraped – to accept the repair, again contrary to advised industry practice. Further, no sealant was used to cover the patch.

In short, according to one repair expert, this repair was an accident waiting to happen.

Defendants in the case included car dealer Mossy Ford, which performed the tire repair in August 2005. Plaintiffs’ counsel was able to show that Mossy Ford improperly failed to take the tire out of service and that this conduct caused the tire tread separation and led to the fatal rollover accident.

In addition, the technician who performed the repair, according to a source, had limited experience and no tire repair training of any kind.

Plaintiffs’ counsel Robert Buccola said, "Our goal was more than just obtaining a monetary recovery. Here, we were able to evoke real change and get the word out to other tire repair facilities of the importance of following tire repair rules to a tee."