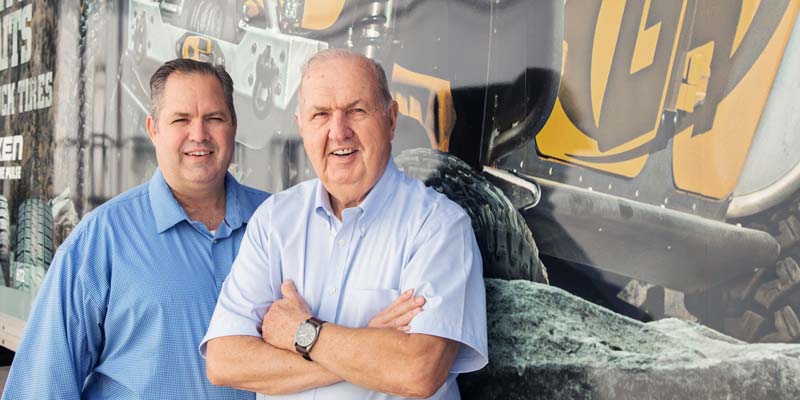 Jerry Nerheim, owner of Waukegan Tire & Supply Co., is a family man first and details how the success of his four stores just north of Chicago starts with his family’s passion for the business and its knowledgeable staff.

If you’re ever lucky enough to spend any time with 84-year-old Gerald “Jerry” Nerheim, the founder, president and CEO of Waukegan Tire & Supply Co., don’t be surprised if you don’t talk much about the tire business.

Instead, phone in hand, supplementary pictures at the ready, he’s more likely to share in illustrious detail just how proud he is to be the father of four well-accomplished children, as well as a grandfather of eight.

In fact, you’ll quickly discover how much he credits the success of his four independent tire stores, all of them situated about midway between Chicago and Milwaukee, to the other members of the Nerheim family. He’ll show you how each one — from his oldest daughter, Lori Nerheim, who is a member of Waukegan’s historical society and chairs the city’s arts council, to his youngest two grandchildren, ages 10 and 12 — have helped shape Waukegan Tire at some point in their lives. Working behind the service desk, organizing the warehouse, making deliveries and even running day-to-day shop operations, the entire family has been involved with the 51-year-old company from every angle.

Jerry’s son, Steve Nerheim, serves as vice president and COO of Waukegan, and just like his father he’s a family man through and through. He’s closely mirroring the way Jerry got him started in the company by grooming his own son, Steffen, a high-school senior golfer and hockey player, to learn the trade by training him to work on the wholesale side of the business, in the warehouse and to make deliveries.

“I started at a really young age, from cleaning to stacking tires, moving tires, just helping out wherever I could,” Steve says. “We’re just really blessed and fortunate to be working with Dad every day. And our team is just incredible. We have some really great people working hard to always do better.”

Jerry can’t say enough good things about his employees. Whether it’s due to the atmosphere (Jerry addresses each of his 60-plus employees by name as he passes by them in the store and through the halls, caring as much about their home life as he does about what’s going on at the shop), the ample opportunities for growth or the generous pay, Jerry says he experiences extremely low staff turnover, so today’s industry-wide technician shortage is nearly nonexistent at Waukegan.

“I think we’ve been fortunate that our people stay with us,” Jerry says. “We have tried to make it as lucrative as we can for them and reward them for their good work.”

“We’ve had a few of our managers who have started as a tire technician, working on alignment and suspension work, and now they’re managers of the stores,” Steve adds. “It’s great so see them find ways to grow. They’re constantly trying to work on ways that we can improve what we’re doing and grow our customer base.”

As correctly predicted by Jerry’s daughter, Julie Nerheim Scroggins, when the company was a Top Shop finalist in 2017 (this year marks the third time Waukegan has received Top Shop finalist honors; the first time was in 2010), the business continues to be on the cutting edge of shops in the automotive industry by offering new services like vehicle wrapping and plastic dipping. But in order to stay ahead of the curve, Waukegan must invest heavily in ongoing employee training; this helps staff members both hone their technical skills as well as stay up-to-date on detailed information regarding the nearly 20 tire brands regularly in stock. These include Michelin, BFGoodrich, Uniroyal, Hankook, Goodyear, Bridgestone, Firestone, Dunlop, Continental, General Tire, Falken, Toyo, Laufenn, Vogue Tires, Vredestein, Nokian and Pirelli.

Jerry credits his well-informed staff with giving Waukegan a reputation for being the area’s go-to shop for custom wheels.

“Our people understand it; that’s the thing. We’re pretty proud of what we can do here, and it’s because of our people,” he says. “We get calls on a daily basis from people asking us if [we think certain wheels] will work. They’ll ask us ‘can I do this on a [Mercedes-AMG] S63, what will work?,’ because they’ve been down the road where they tried it and it doesn’t work. If your [shop is] going to do [custom wheels] you have to know what you’re doing, otherwise there’s so much risk.

“We have them on display and have them in our warehouse so we can do them right now, that day, because a lot of times it’s an impulse item.”

Waukegan has been a Michelin dealer since its founding in 1968. Around 2002, Jerry says Michelin invited him and a handful of other dealers in the U.S. to a meeting in Phoenix, Arizona, to update them on the tire manufacturer’s plans for the future. Jerry sent his daughter, Julie, who was then the vice president and CFO of Waukegan, in his place, setting in motion a chain of events that led to Michelin’s CEO at the time, Edouard Michelin, making a special visit to Waukegan — something Jerry refers to as his “biggest honor.”

“I was [in Phoenix] on behalf of my dad for the meeting and certainly was not one of the larger companies in attendance. One of the things that [Edouard] said was important to him was loyalty, and then he directly referenced our company and our relationship with Michelin,” Julie says. “At that time, he was really being groomed to take over the organization, and I don’t know that he had attended one of those meetings prior to that, so it was a big surprise he was there.

“I was fortunate to have him join me at my lunch table, and I could share with him about our company and about my dad and how hard he’s worked. He was very interested at that time in nitrogen inflation, which we were putting in our tires, and the different brands that we carried, and my dad and his energy,” she continued. “And he shared stories about his own family. It was quite a glimpse into the man behind Michelin.”

The two stayed in touch, and in 2004, Edouard left France to pay Waukegan Tire a visit. To prepare, the stores were cleaned from top to bottom, Julie says, and the family put out French water, French pastries and French coffee made with a French press. She remembers the first thing he noticed during his tour of the building was an old check imprinting machine sitting on an office desk.

“He said, ‘Wow, only the finest modern equipment!’” she says. “We all just laughed. It was just not expected. He had a quick wit and an infectious laugh. He was so humble and personable. When he left, he hugged each one of us, and seeing him hug my dad, that really stands out to me. Thinking back, that was the biggest highlight of my career.”

Prior to opening Waukegan Tire, Jerry worked his way up the ranks at Goodyear for nine years, eventually becoming a store manager.

“At the time, Goodyear sold appliances, everything for the car and home. They sold washers and dryers, vacuum cleaners, toasters, televisions … and all customers were encouraged to buy on budget, which means you became a credit manager as a salesman. So, we had to go out and collect if you didn’t make your refrigerator payment,” Jerry says, knocking on the table as if it were someone’s front door. “And I was in a store that was in a pretty tough neighborhood. Our store was broken into at least once a month.”

It was this experience as a credit manager, Jerry says, that helped him understand what he calls “the human side” of the customer, which, in turn, drives his desire to give back to his community. Locally, Waukegan supports several schools, United Way of Lake County, Breastfest for breast cancer, area sports teams and dozens of civic organizations.

It’s a passion that he’s passed on to his children as well. His youngest son, Mike Nerheim, is the Lake County, Illinois, state’s attorney, and while Julie still helps Waukegan Tire in a consulting role, she founded the 501(c)3 organization Bcureful in 2011 to help find resources to battle Tuberous Sclerosis Complex (TSC), and today works for the national organization devoted to the same cause, The TS Alliance, as a regional program manager for the western United States.

“[Dad] has helped more people throughout the years than I can count,” Julie says. “I have so much admiration for my dad and my brother, and our whole family of employees, and for how hard everyone works. I’m just really proud of the culture of Waukegan Tire.”

Check out the rest of the October digital edition of Tire Review here.﻿