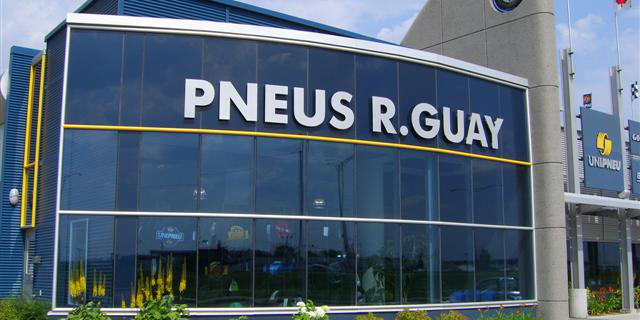 Growing up, siblings Errol, Rene, Candyde, Richard and Claude Guay never had any doubt in their minds about what they would do when they finished school and entered the workforce. From a young age, their parents instilled in them the values that were so vital to the success of their father’s tire dealership: respect, honesty and hard work.

As school-aged children, they began helping their father, Raymond, at Les Pneu R. Guay, the tire business he had worked so hard to turn into a successful, well-known shop in the city of Jonquiere, Quebec.

Eventually the siblings purchased the family business as a group when their father was ready to retire. Their continued hard work and a number of expansions has made Les Pneu R. Guay into what it is today – a tire dealership very deserving of being named a Tire Review Top Shop Finalist.

With 20 full-time employees and 12 part-time employees at the one-location store and warehouse, Pneus R. Guay saw 2007 total gross sales of $8 million. The company, with a sales mix of 84% tires and 16% vehicle service, has carved a unique niche in its market and is well known for miles.

And there are a lot of miles – kilometers, actually – between the town and almost everything else. Jonquiere, with a population of around 55,000 people, is located due north of Quebec City. Founded in 1847, the city was named after Marquis de La Jonquière, governor of New France from 1749 to 1752, and is one of the furthest north communities in the province. 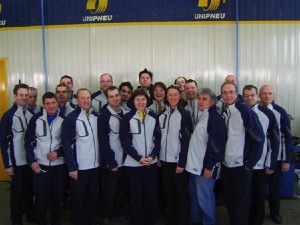 The town grew around the local logging, pulp and paper industries, still very strong in the region. Today, outdoor sports – skiing, golf and boating – bring thousands of tourists to the area. In 1975, Jonquiere grew considerably after it was combined with neighboring towns Arvida and Kénogami.

The road to the shop’s current success was long, and began in 1955 when Raymond Guay borrowed money from a friend in order to open his own gas station. Though the business started out very small – Guay’s first customer was from the grocery store next door, and made a cash transaction of $2 – it wasn’t too long before an expansion into the tire business became a profitable option.

In 1964, Guay opened a tire distribution center, changing the name of the business from Guay Fina Service to a name more along the lines of today’s store: Service de Pneus Raymond Guay. Business was booming, and in order to keep the distribution center stocked, Guay not only constructed a storage building next to his family’s house, but he also filled the home’s basement with tires.

His wife, Annette, was supportive from the start and helped him run the business until their children were born and

she needed to stay home to care for them, according to daughter Candyde Guay, who currently co-owns Pneus R. Guay with her four brothers.

In about 1971, the children began working with their father. “We learned to work with him very early on because we lived very close to the gas station,” Candyde says. “And when we were on breaks from school, we had to work with him. We didn’t have a choice, but we didn’t mind.”

In 1972, Guay decided to close the gas station to devote his focus to tires, vehicle service and the distribution center. With this decision, he built a new location on Dubose Street, which is where the business still stands today. The choice was a wise one, and after only a few short years, customer demand required that the building undergo a sizeable warehouse expansion and the addition of four more service bays.

Raymond Guay retired from the business in 1984 and management of the company shifted to his children. The five siblings upheld the quality of the shop and customers remained loyal.

Making it Their Own

The move from helping their father to running the family business on their own was a challenge for the Guays, but one they willingly met head-on. r employees,” Candyde said. “He expected so much out of all of us, but we learned a lot. In the end, that’s what helped us when we bought the business from him.”

To ensure running the company didn’t interfere with the close-knit family, or vice versa, the siblings set up some basic ground rules that they still adhere to today.

“We decided we were not allowed to talk about business at home or during family parties,” Candyde said. “Also, each of us has a specific job at the store and we have to respect each other’s jobs and decisions.”

Candyde’s focus is on administration, and her brothers consult her before making any important decision regarding the shop. “Errol is the buyer in charge of advertising, Richard is the sales representative, Rene is in charge of customer service the tire shop, and Claude is the salesman.”

“We also have the rule that no spouses can work in the store,” she continues. “It’s easier to work with just immediate family because that way there won’t be any outside influences or misunderstandings of the way we’ve set things up.”

Since they took ownership from their father, the business continued to grow. With space at a premium, the Guays had been renting storage space at a warehouse across town in order to hold the shop’s massive inventory. So in 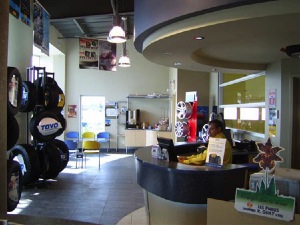 2003, they made the decision to more than double the square footage of the business – from 11,000 to 24,000 square feet – as well as modernize the existing equipment and add bays for heavy-duty truck and RV repairs, Candyde says.

This was followed in 2005 by an interior and exterior renovation, and another expansion earlier this year – this time a new warehouse on the property, offering an additional 8,000 square feet.

The result is a picture-perfect store that is kept impeccably clean, inside and out. “Our parents kept a very clean house and business, and they passed that value on to us. We work hard to keep it very clean, and we have a lot of customers, especially women, who appreciate that,” Candyde says.

“A few years ago, a new customer came into the door for the first time,” she continues. “He started looking all over – the shop, the showroom, the customer waiting area – and we asked him if he was looking for someone. He joked that he was just making sure he wasn’t in the hospital because the place was so clean. We’ve heard comments like that many times.” 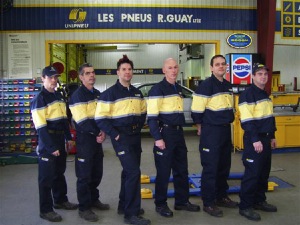 Though the majority, roughly 60%, of sales are wholesale, the shop is known for outstanding service and honesty. “Our customers know we don’t try to sell them products they don’t need,” Candyde says.

“Our customers are very loyal, and in many cases we’ve served three generations of the same family,” she continues. “Some come from as far as Montreal, about 400 kilometers away, but they combine buying new tires from us when they’re in town visiting family.”

It’s not unusual to find Candyde driving to a customer’s house on her way to work to pick up their vehicle and drive it to the shop for the day. After the vehicle is serviced, she drives it back to the customer’s house, drops it off and takes her own car back home.

Pneus R. Guay also provides a shuttle service to take customers to work or home, as well as providing desks and Internet access to customers who need to work while they wait for their vehicle, Candyde said.

“The satisfaction of our customers is key,” she notes. “We put a lot of importance in answering their questions honestly, and we explain in detail everything we’re doing for their vehicle.”

Travel anywhere throughout the city, and you’re bound to see Pneu R. Guay’s name somewhere – either in the 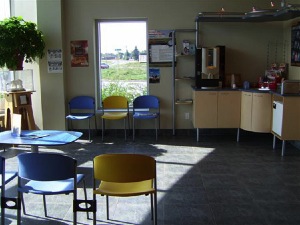 form of an advertisement on a billboard, or listed as the sponsor of a community event or sports team.

“We have a big budget for both advertising and charity, because both help get our name out in the community,” Candyde says. “When we were young, our mother did a lot of volunteering and work for charities, and she passed that value along to us. Also, many of our customers ask us for donations or for our help in charities they’re involved with. And we cannot refuse them, because our customers and our community are our survival. We need them and they need us.”

The company regularly sponsors “Jonquiere en Neige,” an event that welcomes roughly 1,300 ice sculptors to the city each winter, as well as several music festivals in Jonquiere and neighboring cities St. Ambrose and Saguenay. Pneus R. Guay also donates money to the local hospital, the Canadian Cancer Society and research centers for multiple sclerosis and heart disease, in addition to local hockey clubs and Kiwanis, Optimist and Rotary clubs.

“Without favoritism, we make an effort to donate for all customer requests,” Candyde adds.

Also drawing attention is the shop’s extensive advertising – on radio, television, newspapers, road signs and the sides of city buses. “Our publicity is primarily based on our variety of products and the service that we offer to customers. Anyone who sees or hears one of Pneu R. Guay’s ads knows competence and quality is our philosophy,” she says.

While competition exists, the Guays don’t carefully monitor what other tire dealers or retailers are doing and compare themselves. 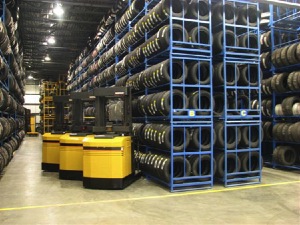 “It’s not our priority to look at everything our competition is doing and come up with ways to do it better,” Candyde says. “We find that what we’re already doing is working. We follow our own business model and we know we’re right.”

Even so, Pneu R. Guay encourages its customers to check out the competition and compare options.

“If our customers want to go visit other tire dealers for comparison, there’s no problem. They almost always end up coming back to us. And that’s because we sell more than tires – we sell service, quality and trust.”