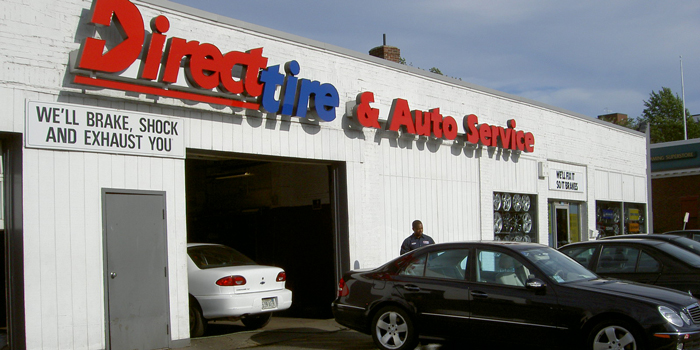 In these days of bargain hunting and hurrying to find a quick fix at the cheapest possible price, it’s refreshing to know that people like Barry Steinberg are still in the tire business.

Since he opened the very first Direct Tire and Auto Service location in Watertown, Mass., in 1974, Steinberg has stood out in his market. From day one, he made a conscious decision to compete in the arena of service rather than price, a move that quickly set Direct Tire apart from its peers – and set the business on the path to success.

“I looked at how everyone else was doing it – by calling them, looking at their advertisements and shopping in their stores – and saw everyone was out there pushing the cheapest possible tire,” Steinberg says. “It was a matter of creating a new business model and doing something that no one else in the market did at that time.”

Taking a gamble, he immediately started advertising the fact that Direct Tire offered road hazard and free replacement warranties on its tires. And the risk paid off – customers seeking the added quality that neighboring no-frills shops couldn’t offer made the switch to Steinberg’s store, and many never looked back.

The decision was the first of many that make Direct Tire, now with four locations and 2007 gross sales of $14.5 million, a worthy Tire Review Top Shop Finalist. 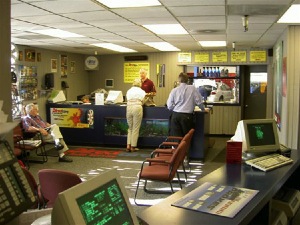 Each of the Direct Tire shops is in the Boston metro area, a location that Steinberg says brings an extremely diverse customer base through the front door. With the many prosperous neighborhoods in the area, the company’s niche in the market is in high demand. “It’s a more sophisticated market and a lot is aimed at upper-class consumers,” Steinberg says.

“We are the expensive spread in town – we’re the Nordstrom’s or Neiman Marcus of the Boston area as far as tires and auto service go.”

While Direct Tire doesn’t compete with discount tire chains, that doesn’t mean its market is without challenges. “Because we service a lot of high-end cars, the car dealers are also our competition. The BMW, Mercedes, Saab, Volvo and Audi dealers are definitely in the tire business now,” Steinberg says.

With all those companies vying for a piece of the market, how does Direct Tire get noticed? For Steinberg, the answer is simple: “Be honest and don’t be greedy.”

“Automotive repair is like going to the dentist – something everyone has to do but no one likes,” he continues. “The auto repair business is one of the Better Business Bureau’s most questioned industries. We have to be honest with the public since they already doubt us as it is. I think sometimes people put the sale at too high of an importance. They need to focus more on the client and what they really need instead of just making the sale.”

Steinberg even goes as far as saying that the best sale of the day is no sale at all. For example, he recently got a call from a woman who was driving her BMW and hit a curb.

“She called us to ask what she should do. She was literally right around the corner from a BMW dealership, so I told her to go there and have them take a look to make sure the tire was safe to drive on,” Steinberg says. “She called a few minutes later and told me they said the tire was unsafe and wanted to charge her to replace it. Since she had already driven it there without a problem, I asked her to bring it over so I could take a look. There was absolutely 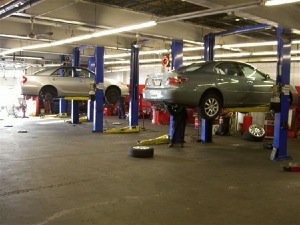 nothing wrong with it – she had just scuffed the sidewall and the wheel.

“We could have easily sold her a $300 tire because she was already under the impression she needed one, but that would have been dishonest,” he continues. “Her husband actually came in and brought a coffee cake to thank us. So next time he’s playing poker with his friends, what’s he talking about? That situation, and how we were honest. That’s probably the best advertising we can get.”

Because none of his employees earn commission, there’s no incentive to sell a customer a product or service they don’t need, Steinberg adds.

As if the fair treatment weren’t enough to win over discerning customers, each Direct Tire location offers a host of amenities to the public. Waiting areas are clean, well-lit and include flat-screen TVs, free Wi-Fi, herbal teas and coffee. “These are all things that people expect to have in an upscale car dealership, but they get them here,” he says.

“We don’t have guys covered in tattoos walking around the showroom or the shop. There’s no yelling or foul language. It makes women – who now make up close to 60% of our customers – feel very comfortable.”

In addition, there is a fleet of 25 Honda Civics divided between the four locations for specific use as loaner cars for customers to borrow, free of charge.

“That’s the biggest thing we have in this market that no one else has,” Steinberg says. “If we get a call from someone who says, ‘If I drop my car off, I hear you can give me a free loaner car and you can do my brakes in one day,’ they’re not asking about the price. It’s all about time and convenience. Our loaner car program has really put us on the map.”

As part of Direct Tire’s “Customers First” program, employees place a note on the rearview mirror of each vehicle 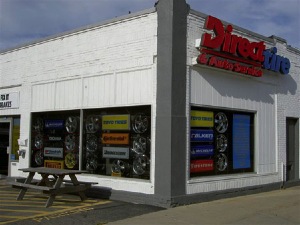 after it’s been serviced. The note asks for feedback by referring customers to the company’s Web site, www.directtire.com. Out of the roughly 190 vehicles serviced out of the four locations daily, at least 10 people e-mail each day.

While most are accolades for service or a particular employee, there are also some complaints every now and then, Steinberg says.

“Without that program, I don’t think I’d hear from a lot of people,” he continues. “I personally e-mail every single person back. It takes me 60 seconds, but people are amazed that they hear back from me. Also, every time a person has a complaint, I solve the problem, no matter what it is.”

As another way of getting valuable feedback, Direct Tire also makes follow-up calls to each and every customer who made a tire purchase or had their vehicle in for service.

If you’re anywhere near Boston and turn on the radio, chances are you’ll hear Steinberg’s voice if you listen long enough. Because he records all of the company’s radio commercials – and that just happens to be Direct Tire’s only form of paid advertisement – Steinberg is on between five and seven radio stations in the Boston metro area year-round. 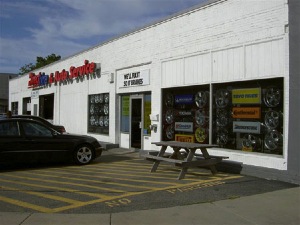 “People think they know me because they know my voice, so when they hear me answer the phone or when I e-mail them back they’re very impressed,” he says. “And I’m sort of humbled that it means so much to them.”

The thrust of Direct Tire’s 2008 radio campaign has focused on educating the public about the Right to Repair Act and informing them they don’t have to return to the car dealer for regularly scheduled maintenance. “This campaign has worked better than anything we’ve ever done,” Steinberg notes.

Direct Tire also recently completed running 250 public service announcements alerting the public about the recent valve stem recall. “We offered to inspect and change any questionable valve stems absolutely free, regardless of where the tires were purchased.”

Direct Tire is also widely known in the area because of Steinberg’s membership in several local organizations, including the New England Tire Service Association, Automotive Communication Council, PACE (an automotive education initiative within Massachusetts), Minuteman Technical Institute’s Board of Directors, and local chambers of commerce for each of Direct Tire’s locations.

But perhaps what gets the most attention from a community involvement standpoint is the company’s role in numerous civic projects and local charities. “We’re known in our market for our support of just about every fundraiser there is,” Steinberg says.

This includes sizeable donations to Children’s Hospital Boston and the Greater Boston Food Bank, as well as the Pan-Mass Challenge, a cycling event that raises money for cancer research. Direct Tire also sponsors a number of youth sports in each location’s town, and recently donated alignment equipment to a nearby vocational technical school.

“We’re presently working on an ‘Extreme Makeover’ program where we will donate a complete auto repair to the most deserving entry,” Steinberg says. “We’re going to totally repair one vehicle at each of our four locations. The family with the greatest need – based on income, debt, number of children, etc. – will get their vehicle repaired bumper to bumper for free.

“We’re proud of doing those things, and it also pays off – we get a lot of press and positive attention,” he adds.

Steinberg acknowledges he wouldn’t be where he is today without the backbone of his business – the employees, which include 86 full-time workers and three part-timers. And he makes sure they know this, too, by offering them respect, generosity and an array of incentives. 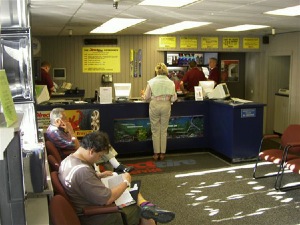 “I typically pay my people 15% to 20% more money than they could make anywhere else in this market,” he says. “We also have sensational benefits, a good vacation package, a great 401(k) plan and full medical insurance.”

Each Direct Tire shop is closed Sundays, and Steinberg ensures every employee only works five days a week. “I’m a firm believer in quality of life and there’s no benefit to anyone to work them to death and for them to be here 60 hours a week, not spending time with their family.”

At the time he switched his employees to a five-day workweek, Steinberg raised the hourly wage to compensate for the lost hours of that sixth day they wouldn’t be working. “They really appreciated it, and so did their families,” he says.

Steinberg also rewards his staff by giving them a bonus check equal to one week’s pay on each anniversary of their employment date. After five years, he gives them a leather jacket; after 10 years, the gift is a watch.

“We have 24 employees with more than 10 years with Direct Tire and five employees who have been here for more than 20 years,” Steinberg says. “My employees take care of me, so I have to take care of them. And when I need them, they step up. When it’s snowing out and I need all hands on deck, I know I can count on them.” 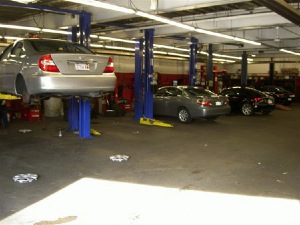 He also ensures his techs are experts in the field, and all are ASE-certified and have completed Tire Industry Association tire service training.

In addition, Direct Tire has its own in-house mentoring program in which new employees train with a mentor for up to 90 or 120 days, until the mentor signs off that the trainee is fully capable of handling the job. “Even if you’re a fully trained technician, we take the time to teach you the Direct Tire way,” Steinberg says.

“When your employees are as happy as they can be and trust that you have their best interests in mind, they’re going to bring your product to the public more honestly.”